Indar Kanhai to Record in Bollywood 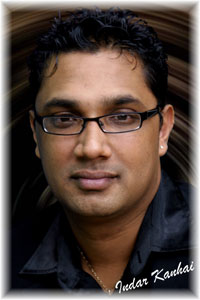 Tuesday , October 14, 2008 - Port of Spain – While Trinidad and Tobago’s Fireball is heating up Billboard’s Dance Club playlist local singer Indar Kanhai travelled to India on Sunday to record a CD of original music with leading Bollywood singers. We may not be that far away from seeing a Trinidad and Tobago act in the top 10 of the Bollywood charts.

In 2003 Kanhai was invited to perform at the Bollywood music awards which was held in Atlanta City. His performance caught the attention of Kumar Sanu. This led to the development of a relationship with the outcome of which will be Kanhai’s soon to be released international album. Indar Kanhai is one of the best local Indian singers and is also a renowned musician and leader of the Trishul Orchestra. Kanhai also produces events such as the Valentines and Mother’s Day concerts that feature both local and international Indian music artistes and is a well known radio program host.

The Trinidad and Tobago Entertainment Company Limited (T&T Ent) sponsored Kanhai’s international CD project which will play a key part in the development of his career in the Indian market. T&T Ent is proud to support this next step in the career of an artist whose talent has already been acknowledged locally and internationally by one of India’s most famous playback singers.

‘The music we will be recording will be more in line with those heard in modern Bollywood films’ says Kanhai. State of the art equipment, the marketing contacts and the recording skills of the Indian team will all combine to help break him into the Indian market. Kanhai has already experienced success with previous releases in Suriname and the Netherlands.

T&T Ent sees this as a great opportunity to support local Indian music and break into the Bollywood market which holds much potential for many of our entertainment practitioners. The huge film industry in Bollywood fuels the music industry and produces more films than Hollywood every year.

At the end of the year T&T Ent will launch its re-engineered http://www.ttentonline.com/ website. This website will feature downloads of all genres of music and videos from Trinidad and Tobago, including Kanhai’s past and future hits, and an on-line, searchable database of all those involved our entertainment sector.

2 Responses to "Indar Kanhai to Record in Bollywood"