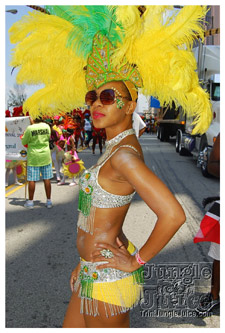 22 Years of any event does not come without commitment, patience, great management and having a great team in place. This year, the 23rd showing of the Atlanta Caribbean Carnival was no different. Headed by elected President Patricia Henry, the ACCBA put on another fantastic event in downtown Atlanta. Masqueraders donned the streets in their costumes and glitter, wearing huge smiles in anticipation of jumping to the 2011. The thousands of bystanders were treated to good music and an introduction to what a Carnival celebration looks like. The event culminated with a concert at the festival village (Cor. Auburn Ave. and Hill St.) that included the likes of famed band Burning Flames.

CROWD:
Undoubtedly the largest crowd that ever assembled in the streets of Atlanta for a Carnival event!!!!Atlanta's people took the opportunity to bring their families to the parade with their lawn chairs and umbrellas. By the way...they did not need the lawn chairs as everyone was on their feet dancing. Certainly a trendy crowd that enjoyed themselves. 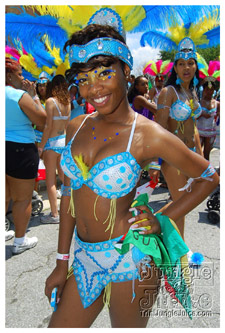 VENUE?ACCESSIBILITY:
They certainly need a larger place to accommodate the growing crowd. The location of the vendors were great, the positioning of the stage, the Hotlanta air was not too bad. The place was clean, and accessible. The Atlanta PD did a great job at crowd control making this event incident free.
VIBES:
The excitement, energy and entertainment was at its best. Some of the Caribbean's top soca performers did not There was no question about it. Joining Burning flames,Skinny Fabulous, Benjai, Jadine, Talpree and Iwer George all excited the thousands on hand. Iwer stole the show as he climbed into the crowd and commanded them to follow his lead. DJ's Kevy Kev, Choice One, DJ Stephen and Tony Tempo all added to the special evening for the Atlanta Carnival. 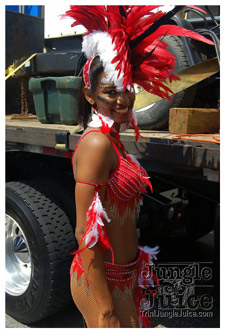 FOOD/DRINKS:
Vendors from various parts of the Caribbean lined either side of the street with a variety of foods. The large crowds had alot to eat and drink. When last you guys had a coconut water or a snow cone? Well even at the Atlanta Carnival...both were available. 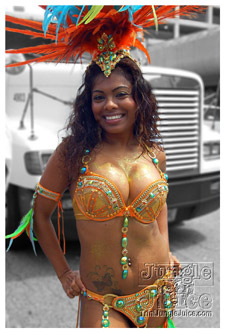 COST/VALUE FOR MONEY:
The cost was affordable. This was a family event ACCBA made it so entire families can come out.
Overall, the event was well planned and executed. To the ACCBA committee members....congrats!!! Pat, Karen, Charles and Junia....Thanks for having us and making TJJ your #1 Marketing Representative. The Soca Diva Jadine, great job!!! We look forward to hearing more from you in the future. DJ Thunder from Charlotte...much respect! To Kershelle and your Boston Crew...we know you guys had a great time. DJ Touches and DJ Choice One...Bless up! And to United Ramblers and Inferno....keep it coming. Soooo....another Atlanta Carnival in the books. Atlanta....Great job...and We Coming Again....in 2012!!!