By Jo-Ann aka Karamel
Published on 05-Jun-11
With the temperature at 58 degrees and trying to reach Ms. Text-aholic Juice with no response, I was really thinking hard about leaving my bed to make the 9am Buenos Dias boatride.  I’ve always heard the reviews from those that went in the past years but this would be my first time going on the ride.   So finally after about an hour ...
>> View Buenos Dias 2011 Boat Ride Gallery 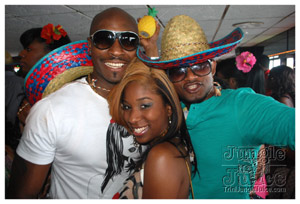 With the temperature at 58 degrees and trying to reach Ms. Text-aholic Juice with no response, I was really thinking hard about leaving my bed to make the 9am Buenos Dias boatride.  I’ve always heard the reviews from those that went in the past years but this would be my first time going on the ride.   So finally after about an hour, I finally heard back from Ms. Text-aholic and we had about half hour to get dressed and head for the pier.

Boarding had already started when we reached the pier and from the looks of things, both boats were about ready to sail.  Yes, for the second year, there were two boats and it was nice to see that there was no set of pushing and fighting to board.  There were sombreros, pineapple and flamingo cups as well as colorful flowers for your hair being handed to guests as they boarded the boat.  It was definitely nice to see Thief Head Crew (THC) going the extra mile for their guests. 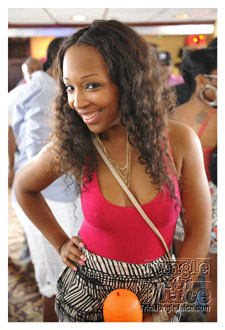 Now that we finally made it on the boat, I had to scope out the scenes. Two bars on the main floor, both packed to say the least, food being served on the lower deck and on the top deck was the breeze out spot.  Quiet Storm was definitely getting the crowd warmed up as we started to sail.  There was definitely a really nice vibe, to go along with the colors and styles that were ever present on the boat.

There were girls in everything from swim wear attire, to cat suits, to dresses and last but not least shorts and blazers in every shade of the rainbow that you could think of.  But then there were some fashion blunders that needed to be brought to light.  Ladies, if you are going to show your toes, please we begging, get a pedicure.  We spotted one chick in sandals with her toes hanging over her shoe, toe nails in desperate need of cutting down and to top it off she had no polish on them (OMG…..is she serious with that??!!), then there was a next one who had on tape to keep her sandals together.  I don’t understand some of these fashion blunders but for the friends of these two women, all I have to say is allyuh wicked. 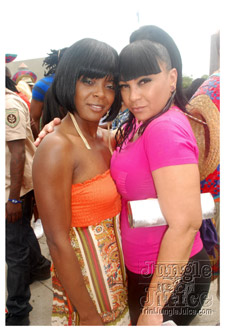 Aside from the interesting sightings, Back to Basics, Natural Freaks and Platinum Sounds had the boat pumping.  Hats off to Platinum Sounds for playing the nice retro Soca session.  Oh how nice it was to hear Soca from the last couple years; rather refreshing.  Natural Freaks came on next and done the dance with a wicked reggae session.  Now the boat was getting swanky, then the dj started begging the people on the top deck to come down to the lower floors because the top of the boat was too crowded; apparently the boat was leaning on one side.  Next thing the dj said music lock off the top deck since the crowd wasn’t listening.  The lower floors started to get crowded again, and before we knew it, we were heading back to the pier.

Well done THC, Buenos Dias was definitely lived up to the reviews.