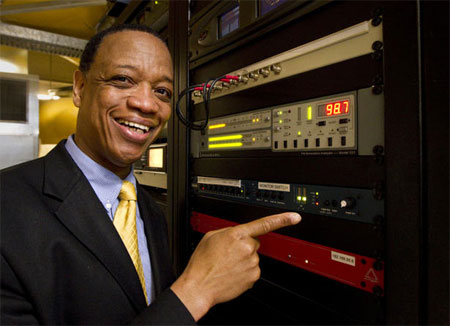 IBN is the owner of Radio 98.7 FM (also referred to as CARN 98.7), which will target the Greater Toronto Area’s vibrant Black and Caribbean population with an eclectic mix of music, news, talk, and cultural programming. The station will also reach a broader audience within the 25-54 demographic of Torontonians who enjoy Black music of all varieties.

“This is a great day for the Toronto radio market,” said Fitzroy Gordon, Founder and President of IBN. “Toronto’s newest commercial FM radio station will change the landscape of radio in the city and will add quality, substance and fun to the listening ears. Radio 98.7 FM will not only deliver great music and entertainment, but will be a station for both youth and adults to share valuable information and dialogue.”

Radio 98.7 will now begin the task of a working towards launching with a full programming schedule sometime this fall. In the meantime, the station will attempt to be on-air broadcasting a music-only rotation prior to the Scotiabank Caribbean Carnival (formerly called Caribana) in order to give music lovers and advertisers the opportunity to connect with each other during the celebratory festival season.

The station will unveil its call letters, its new name, and its branding in the coming weeks. Radio 98.7 will also immediately begin to develop its programming, which will encompass a music format (including R&B/Soul, Hip Hop, Gospel, Reggae, Soca, and other World Beat genres) and a robust news & talk format that caters to the tastes of the Black and Caribbean population in the GTA.

“As of Monday morning, we will hit the ground running,” said Gordon. “Our first order of business will be to secure administrative and studio facilities, hire advertising, promotions and management staff and begin building our website. We know that the community has been waiting for this type of station for a very long time, and we can’t wait to deliver to them the sweet sounds of R&B, Reggae, Soca, Gospel, and World Beat, as well as talk shows that will give them a voice to express their opinions on issues in their diverse local communities.”

By way of background, Gordon and his team first applied to the CRTC in 2002, and again in 2005, for a radio licence to serve the Black and Caribbean populations of the Greater Toronto Area (GTA). In 2006, the CRTC granted a partial license to Gordon subject to him finding a technically viable frequency. The frequency chosen after much technical and engineering testing was 98.7 FM, which was second adjacent to CBC Radio 99.1 FM.

The CBC, however, attempted to block IBN’s efforts to use the 98.7 frequency, citing technical concerns. They refused to cooperate with IBN’s technical testing procedures that were intended to arrive at a feasible solution for both parties. Undaunted by this obstacle, Gordon and his team lobbied the Federal Government. In July 2009, then Minister of Industry, the Honourable Tony Clement, granted permission for broadcast testing of the frequency.

In addition to meeting the rigorous technical requirements of Industry Canada, IBN successfully demonstrated to the CRTC that it best reflects diversity of new voices in the community, that it would not have a significant negative impact on existing stations, and that it meets the needs of the largest underserved community in the GTA.

“Without a doubt, Prime Minister Stephen Harper along with Ministers Jason Kenney, Tony Clement and others, with the support of key staff members at Industry Canada and the CRTC, have all contributed significantly to the Black population getting its own radio voice in the city of Toronto.” said Gordon. “Battling the powerful CBC was extremely challenging, but our determination on behalf of the Black and Caribbean community would not be denied, and I am proud to celebrate this achievement as a victory for the underdog.”

Gordon also added that he is proud to be a part of history by becoming only the second African-Canadian to own a commercial radio licence. Gordon is particularly proud to become the first to launch a radio station specifically dedicated to the Black and Caribbean population in Canada.