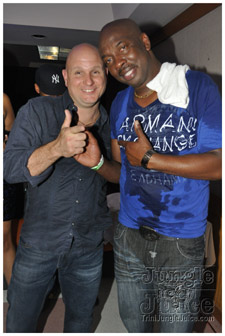 Setting the stage for this month's Soca 360 was a special performance by Iwer George. With his big chune for 2011 "Come To Meh", people from many countries flocked to see the big-time Soca artiste from Point Fortin, Trinidad & Tobago. Although, his performance wasn't long, he always knows how to hype up the crowd. He had a contest with the women he pulled up on stage to compete for best dance/performance/singer. The winner (who practically performed the whole time he was on stage) won $200!!

There was big vibes in both the Naked and Soca 360 room. This week 'Naked' played inside the venue alongside Soca 360 (when usually the venue is outside) and it was raaaaaammmmmm! I have never seen it more packed! Everyone was having a great time but to get from one side of the room to the next became difficult to move around as the night progressed.

Each month both the Soca 360 and Naked scene gets a bigger and bigger crowd! So big that the venue is about to change to an EVEN BIGGER VENUE! Stay tuned to the monthly updates on what's to come...