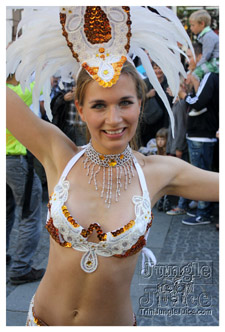 If you want to experience Copenhagen when its best, come during C A R N I V A L. The vibes starts the week before with our annual Distortion, a 5 day free street festival, 155 parties in every part of the city with dj's playing house, dance, reggae, dancehall, old dub, rnb, hiphop - you name it. People were in the streets from afternoon till midnight, enjoying themselves with drinks and beers, dancing, laughing, skipping  (yes we skipped with random people till our feet were black), blocking the streets so that no cars could pass. Every day the crowd growed bigger and bigger and got more and more intense as the sun went down. When the party ended we couldn't leave the streets because we were having A TIME. Most of these parties are free and just around your block if not on your block, which makes it easy to participate for every living creature. This is a danish way to welcome the summer: beer, music, a blanket and good company, not we warm for carnival. 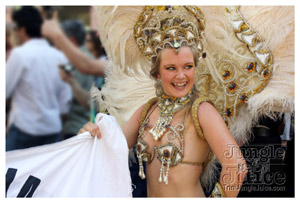 Friday to Sunday is we ting. Its pentecost and the 29th time we celebrate Carnival in Copenhagen with more than 80 samba orchestras and band doing a parade. More than 100.000 will be there for this event and so will I. The carnival has basically been built around the Latin and South American music, dance and parade procession. Over time it has evolved into a cultural and musical festival of world music. The development has, among other things, opened up to other contemporary, urban genres and rhythms from Africa, Latin America and the Caribbean, and European and Middle Eastern carnival traditions. The parade was amazing!! Samba dancers looked stunning and batarias (brazilian drum bands) played good rythms to dance to. You have to be a member to join in the parade and as I'm a qualified dancer in samba I chose to do my dancing steps on the side. 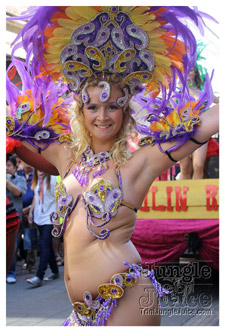 To get a little taste of the caribbean I went with a truck loaded with carnival music. Bajans, trinis, guyanese etc. came and behaved wotless. We even picked up some samba dancers on the way because people could see that we had vibes and jamishness and who wouldn't want to be a part of that? All orchestras and trucks ended in Faelledparken where we continued the party, all nationalities gathered, celebrating carnival together untill sunrise early monday morning. What a weekend!!