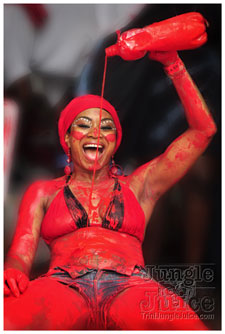 As always at the end of a Carnival there has to be a parade - the streets are lit up with the sounds of soca music (in this case, there is a different variety of music on the road due to DC Carnival actually being a parade! ... so you had some congo bongo nigerians ... some ragga yagga dancehall ... and you had some small island 'non-english' music ... oh well ... we dance to anything!!) Without a doubt there has to be a complete soca truck or soca mas band as we would put it :) and that is the defiant but yet fantastic Mud Band as well as Indulgence Mas Band. There will be three sides to my story ... the orgasmic, the numbing and the cry for help ...

With 2011 being an absolute iconic year for Soca music, every carnival around the world will resonate with wonderful music and people will experience the best time of their lives. The Mud Section albeit a dirty mas band still recreates the entertainment and vibe that J'ouvert and playing mas causes in the human psyche and gives those memories that will last you a lifetime, a meaning beyond measure. Chipping down the road with your friends, family or lovers and rubbing mud all over your body to create that dirty feeling followed by heavy wining and gyrating of bodies together, compounded with the powder being sprayed all over your body ... is that heaven? or no? 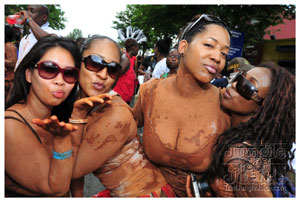 Double trouble then comes into play when you bounce up Indulgence Mas Band, the paint section, with the ladies in their pink and baby blue shorts (batty pump pum riders) and well that is the only time paint and mud can mix! So round it up ... paint ... mud ... a variety of women sharing bamcee all day either on the road or in the air (which ever is your pension plan) and however you deposit into that plan! Trying to walk through these bands only lead to one thing and I can guarantee you this ... constant tantalisation ... constant wining ... constant elevation (oh yeah people were elevated ... two ways ... people elevated by other people ... or people elevating themselves ... the air is free people ... why not elevate in it?) Guaranteed a splendid time is had by all and there could not have been a better way to start the Carnival Weekend that Saturday. 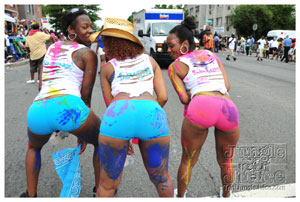 So as there were some serious issues with DC Carnival Parade for 2011 especially as the actual thing almost did not take place - the usual route for the parade was shortened completely and the police on the road were just disgustingly impolite!!! Furthermore, walking to get to the parade was a huge issue - being shouted at, to walk on the pavement and do not walk on the road, by the creatures that call themselves humans posing as police oficers, was just absolutely shocking. Continuing with the rotten topics - while taking a jam on a bamcee being told to stop and walk down towards the end point of the parade was also very disturbing and disheartening. As a result of the issues, the parade was also scheduled to finish at a certain time and when the police realised that this was not taking place - they decided to drive their motor cycles through the crowds all the way to the begining point of the parade and then literally drive people down the hill towards the end point of the parade. It was like slavery days to be honest ... shameful ... epic fail according to veteran DC Carnival patrons. What is also disturbing about this parade is the fact that there are no drink trucks ... what is up with that? Oh and lets not try to remember that so called "last lap" they had at some car park, it was an absolute waste of time! I think DC Carnival needs a little re-vamping in my opinion ... something to work on if they are having the parade next year!!!! After all, being dubbed by some as the BEST Carnival in United States Of America ... that is a heavy title!!!!

The Cry For Help 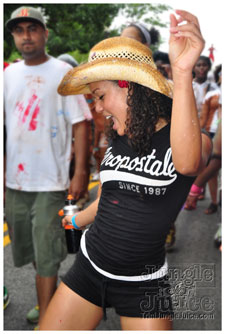 Every once in a while when a large group of people come together there always seems to have disharmony amongst some ... so needless to say that DC Carnival was not without its share of break ups and fights and disgusting behaviour ... there was a grand total of about two disruptions that really were unnecessary and without a doubt just raising the pores of the people who just want to have a good time. There was also a situation with the mud band ... apparently the generator on the truck blew ... so there were random moments of insanity on the road amongst the patrons in the mud band since they seem to be singing to "non-music" however, still dancing and jirating to what could only be music in their own minds ... i.e. "Cry For Help!!!"

Scorn's Report Card®™ - DC Carnival Parade:
DC, you get a Scorn stamp ... not a full approval ... but an approval pending investigations and solutions! Then I will be back ...