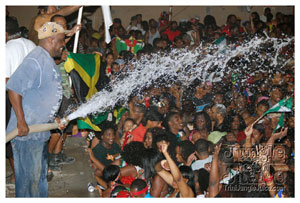 Ohhh My Laaaawwwwwddddd!!!! Dr. Ram Dass said that he meant to warn me! Steupes…..The 2011 Houston Carnival Jouvert was pure madness! After arriving at the ‘Truck Yard’….(Yes…I did say Truck Yard people) I wasn’t sure where to start as people where everywhere! This event reminded me of the days when P.S.A on Long Circular Road in Trinidad hosted events and was packed to capacity. Both inside and outside was packed to capacity….and still more people kept coming. From the inside….it was clear that we were in a WASA Fete! Thousands of people and a water truck on standby. Soooo….a young lady who recently posed for her photo, asked me what the water truck was for… “is it just in case of a fire?” Poor soul…I did not want to lie. And in an attempt to clearly explain why there was a water truck with a hose on the end of it pointing directly to the crowd…I had to think quickly. “Well you see….ammm….well the promoters…..And as soon as I was getting ready to make some excuse, the hose came on, water was sprayed everywhere, slapping people in their heads and faces. In another part of the world, this act would have been viewed as a way to curb the possibility of riots! Needless to say, that’s the last time I saw that particular girl that night. But it wasn’t just water….This was ah rel Jouvert!!! Mud band, Blue Devils and Jab Jab posse business…As a matter of fact…Jab Jab posse came into the venue drenched in oil, spitting fire while carrying a coffin with them. Serious business! And as for all others in attendance, it was a great night for them, especially being able to represent their country while jamming to the sounds of the DJs. I am sure that the vendors did very well as thousands of flags from various countries could be seen waving higher than high! Oh what a night! Houston Carnival Jouvert….was about to blow up!!!! 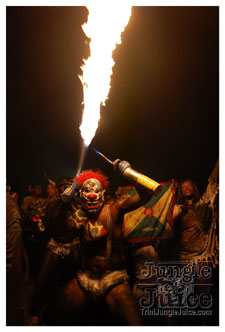 CROWD:
This crowd was a true cross section of the variety of cultural dynamics that existed in Houston, TX. The obvious majority was from the Caribbean as can be see by the national flags waving….but a strong contingent from Nigeria and Puerto Rico was certainly evident. The majority of the crowd was a young to mid-age mixture. Certainly not trendy in wear, but the dess code was indicative of the event…. Jouvert… The Request Band from NY was front and centre with some of the members dressed in night gongs…while one man could be seen in an adult diaper. Go figure! And could you imagine a lady was there with a baby on her shoulder? Trust me…on this night…everything was possible. And if you choose not to believe me, just look for the photos of the Jab Jab who carried the two live cocks in the party and staged a cock fight! Geez an ages! But all in all…the placed was packed!

VENUE/ACCESSIBILITY:
For a Jouvert, the venue was idea. A bit dusty, but ideal. The party area resembled an old airplane hanger abandoned and left for dead. But there were no complaints. On the way in, cars were lined up for miles on either side of the streets. The place was ideal for the old sneakers and buss up pants dress code we saw….but that’s Jouvert for you! The only problem that was evident was the rising dust at times from the stamping of the feet…but trust me….no one really cared! Parking, though a long ways away for some people, it was good. No complaints came. 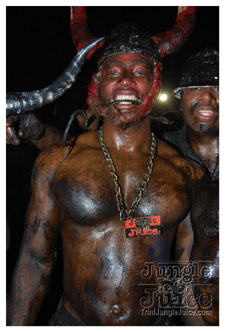 VIBES:
The #1 hype man in the business is certainly not notorious for his soft voice. MC Wassy from NY is a popular choice for Carnivals because he is truly the voice of the people. And when Wassy grabs hold of the mic…you know the party starts! The vibes was nice everywhere people could be seen…from the party area, to the stage, to the DJ booth, to the vendor booths to back stage…Everyone was there for one thing and one thing only…to have a great time! And that they did. As mentioned before, not only the Caribbean Islands were represented. Yet, it is astonishing how Soca music, once played engulfs everyone that listens. After asking one of the Nigerian boys what he thinks about Carnival and Soca music…his answer was simple… “This music is de best! I want to go to Carnival every year and every where!” Now though I believe there was a little too much rap music that was played, I’m sure it helps keep the younger crowd involved in the celebrations.  DJ Reny and DJ Stephen however,  once again kept the vibe nice with every selection they played. The highlight of the Jouvert certainly came from the water hose though. It has become the thing people look forward to the most. Soca playing, women wining, man jamming, it hot as hell in Houston…and ah water hose cooling you off….My Gosh….who could ask for better on this night! And when that was not enough, a music truck mad a few rounds around the yard and in true Jouvert form, the people followed. What more can you ask for!

FOOD/DRINKS:
Soooo...for obvious reason, Cool Runnings does not only have great food, but they were everywhere so far. Every event, their presence was felt. They had the biggest booth of the night and the lines were longer than a Machel Montano concert at Madison Square Garden! All the bars were cash, which made it easy to purchase food and drinks. The funny thing is, people were pulling out zip lock bags that carried their monies. What a sight!

SERVICE:
The service so far is great. The promoters are ensuring that not only TJJ get everywhere on time or in time, but the same for the artists, DJ's police etc. They are very visible and remain connected at all times. Throughout the night they were faced with a bit of diversity but still they have a great team in place that manages to get the job done! Great Job Houston Caribfest! 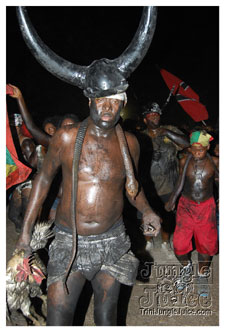 COST/VALUE FOR MONEY:
The cost was good. Again....with the thousands on hand, there was no question of affordability. It was more an atom bomb for your buck than it was a bang! The cost was $20.00. And in these times...You better be getting alot for your Tweny!

All in all...the event was great. We had a great time. Kershelle and your crew...nice to see you guys in Houston. To the Atlanta Madd Colors posse...Ah hear allyuh loud and clear...Nice to see you guys! Jacksonville promoters...much respect! Request Band...thanks for the love allyuh showing TJJ! Trudy and Giselle...I don't know who make dat corn soup but it was a boss! Another serving please!!! Sharon, thanks for looking out! Ms. Rea...where yuh gone? Hype man Wassy....Yuh done know you in charge!!! We heading to the concert with Iwer and Crossover....where you going?