By Nina aka Popot Barbie Juice
Published on 01-Jul-11
Bus Tours hitting as many rum shops on the way as possible are a common thing in Barbados, so why not bring this to St. Vincent and combine drinks and scenic photo stops to create an ...
>> View Rum Crawl Bus Tour 2011 Gallery
>> View St. Vincent & The Grenadines Carnival 2011 Coverage 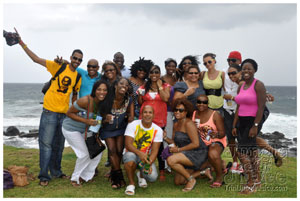 Bus Tours hitting as many rum shops on the way as possible are a common thing in Barbados, so why not bring this to St. Vincent and combine drinks and scenic photo stops to create an entertaining Carnival Friday Rum Crawl Bus Trip? Well done Christopher John of Motions Entertainment, organizer and promoter of this first time event.
Boarding was at the busy centre of Kingstown around 2pm, once all guests and coolers were ready we headed to our first stop: Calliaqua, Soca Dan star Luta grandmother’s shop to charge up with the local "Sunset Very Strong Rum" ... and boy, that stuff is NOT easy. We talking 84.5% ABV. Let me try to describe the flavor as pure Jet fuel running down your throat! But hey, I must say, it did its job ... back on the bus everybody started jamming to the music and no one sat still anymore.

We took a drive through the huge construction site of the new international airport to our first picturesque photostop: Rawacou. Some took a few snapshots of the man made pool that frequently filled itself with seawater of the quite rough Atlantic ocean, other posed for pictures laying on the ground (thanks to Sunset rum?)… lol … 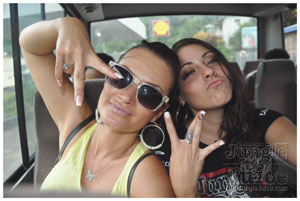 Back on board, drinks in our hand, singing along to the local Vincy soca tunes of 2011 we made our way to the Peruvia Vale Gas Station, stretched our legs, filled up the cups once again and enjoyed the next coast line look out. After picking up more late arrivals in Mespo and enjoying a few more drinks (it really was a RUM crawl) with some Bajan visitors chilling in the valley we finally got to Greggs our final and mostly anticipated stop: Ossie Pork World! Yummmmeeeyyy!!! This place is extremely popular among the locals and the lightly seasoned and amazingly flavorful pork was to die for… or shall I say to crawl for? We participants of this bus tour were surely an attraction for owners and also the neighbors of this bar and BBQ shack because slowly but surely everyone seemed to be coming out of their homes to see us dance in the road. Passing cars were stopped with some “bumpa action” and passing people were sandwiched by the female Rumcrawlers (and no one complained).

The international Rumcrawl crew had a blast and was safely driven back to Kingstown were our paths parted... not for long though since Limerz Cruise "Delirious" boat ride was waiting for us the next day.

-Popots Barbie Juice
"Friends and Popots on de bus, shots of Sunset are a mus!"