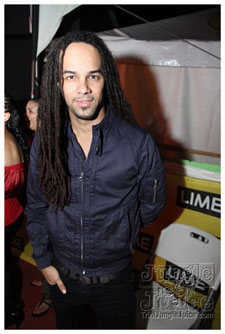 Liat 310 touched down in St. Vincent at 7:00am on Wed June 29th directly from Trinidad. It’s my first time in SVG... so yeah, I’m also a Vincy Mas Virgin! Time for the Carnival Jumbie to get his cherry popped!!

Our most gracious host for the carnival, Mirage Productions, picked me up at the airport, sorted out my Vincy BB swag and got me settled in at the Grenadine House hotel in Kingstown with a welcome gift basket filled with loads of local goodies (not forgetting the Sunset Very Strong Rum ... yes apparently they had a hidden agenda to get Daddy Juice crunked for my entire stay .... no complaints here).

Tonight’s action was the annual Fire Fete featuring headliner KES the Band and Iwer George, and guess where the band was staying? Yes, at Grenadine House as well. So it was my duty to ensure that the band’s dancers (Candice, Jillia and Naila) ate all of their dinner and were on time for band pick up at 11pm because someone’s clock was in a different time zone... right Jillia? 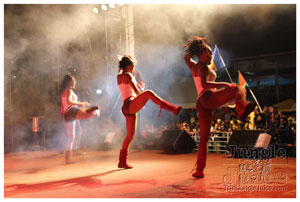 Getting down to Victoria Park minutes after 11pm, most of the local acts had already performed so I decided to head to the VIP section. With all of the rain that fell earlier I was happy to see that VIP was an elevated area covered by a huge tent. Now this didn’t stop the action in general admission with feters rooooooooting like a hog and kicking up like a donkey in the muddy grounds ... all tu'ning animal, this CARNIVAL! Free drinks were flowing in VIP so their level of fun wasn’t too far behind, so much so that at the end of the party no one was wanted to go home as they clicked iron to bottle singing “No no we ent going home ... we ent leaving!”

Skinny Fabulous (“Rumble”, “Rave Out”, “Gimme Gyal” and “The Cave”), Problem Child (“Miserable”, “Madd House”, “Who Calling Me” and “In The Middle” joined on stage by Daria) and Iwer (“Come to Meh” is still mashing up any crowd) all gave solid performances before Kes the Band hit the stage as the rain started to fall again. 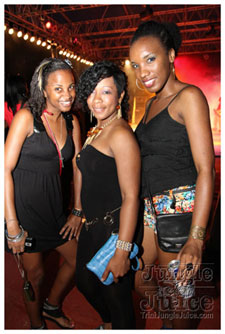 Kes the Band pretty much delivered their regular set, kicking off and ending their performance with 2011 smash “Wotless”, which got the biggest reaction as expected. Kees (apparently now everyone's secret baby daddy) made his way into the crowd, showing love to his female fans and even held a partygoer's Vincy flag high in the air and saying that he wants a Vincy passport after this trip. Oh yes, he didn’t fail to pick up a smallie a on stage and jam her good while performing “Ah Ting”. It was a strong performance by the band for a country where they are still gaining popularity. My only disappointment was not hearing them perform one of my favorites for the 2011 carnival year, “Where Ya From”.

While Kes the Band had an 7AM flight to catch to get to Houston CaribFest “Ultra GLO” the following day, myself and fellow Carnival Jumbies were trying to figure out the next flex. It’s only 3AM ... who say Heritage Square?

Dwight, thanks for having us.

Taking No Prisoners for SVG Carnival,
Dre aka Daddy Juice aka The Carnival Ref