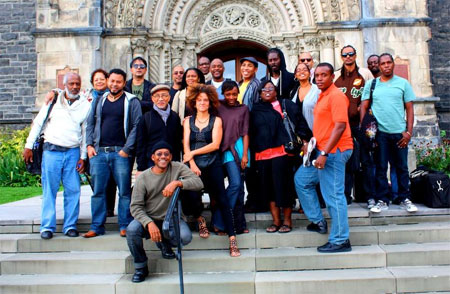 TORONTO (July 11, 2011) - The creativity of Caribbean filmmakers will be on show in Canada this September when CaribbeanTales Worldwide Distribution's Toronto Film Showcase returns to "Hollywood North".

Now in its sixth year, the 2011 Toronto Film Showcase, and the recently introduced Market Access Program, returns from September 7 to 17, 2011 and will run alongside the Toronto International Film Festival.

The film fest engages families, youth, community groups, and the celluloid industry in a program which includes workshops, screenings, networking sessions, and other activities celebrating the burgeoning film and television sector in the Caribbean.

"Last year we hosted a strong delegation of about 40 filmmakers and enthusiasts and we are hopeful a number of them will return to update delegates on the success of the partnerships they have forged and projects they have developed," said Solomon, who also welcomed new attendees to make it to Toronto in September.

Solomon also announced a new partnership with the popular Harbourfront Centre, the headquarters for the 10-day showcase which along with the market access incubator program, features the launch of some exciting films, docu-dramas, and CTWD's 2011-2012 catalog of films.

The award-winning Trinidadian filmmaker emphasized the region's premier film distribution company was definitely on the move and full details of the showcase will be unveiled at a press conference on July 20 in Toronto.

Among other goals, the Toronto showcase aims to raise the profile of Caribbean filmmakers and their products, support the growth of a vibrant world-class Caribbean film and television industry, and serve as a platform for promoting the Caribbean as a premier warm weather travel destination and location for film production.

CTWD, a member of the BIM Ventures family of entrepreneurs, has hosted two film festivals in Barbados, another in New York, produced training workshops for filmmakers, and now has scores of films in its catalog.

About CaribbeanTales Worldwide Distribution
CaribbeanTales Worldwide Distribution is the first full-service film distribution company in the English-speaking Caribbean, and aims to become the go-to solution for producers and buyers of Caribbean-themed content. The company holds marketing events through the CaribbeanTales Film Festival Group, and provides co-production services to producers. CTWD was founded by award-winning filmmaker Frances-Anne Solomon, and its principals include creative industries expert Dr. Keith Nurse, economist and businessman Dr. Terrence Farrell, media personality and producer Lisa Wickham, and filmmaker and writer Mary Wells. CTWD is a member of the BIM Ventures family of entrepreneurs.