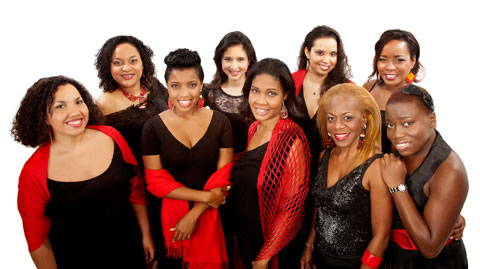 PORT OF SPAIN, TRINIDAD & TOBAGO (JULY 14TH, 2011: This weekend (Friday 15th, Saturday 16th and Sunday 17th July), the celebrated, crowd-pleasing production of the Marionettes' Carmen – what many are saying is the biggest and best show for the year – takes the stage with two extraordinary casts.

The Marionettes’ production of Georges Bizet’s Carmen, sponsored by bpTT, premiered to a packed audience at the Queen's Hall last weekend with a cast led by Candice Alcantara as Carmen, under the patronage of several dignitaries including President George Maxell Richards and his wife. Featuring an award-winning cast and crew of nearly 200, including young string players from the UK, it is the largest and grandest production the Marionettes has ever undertaken.

The story is set in Seville, Spain, around 1820, and centres around the beautiful and fiery Gypsy girl, Carmen. Passionate and fiercely independent, she falls for and seduces the only man who has shown no interest in her: the young Corporal, Don José. His love for Carmen leads Don José to abandon his family and fiancée, Micaëla, mutiny against his superior, and join a renegade band of Gypsy smugglers. But Carmen lives to be free, and Don José's possessiveness and jealousy send her in to the arms of the celebrated bullfighter, Escamillo. As Don José descends into desperation and despair at Carmen's betrayal, the opera hurtles toward its heart-wrenching conclusion.

The opening weekend performance cast – which opened to rave reviews from theTrinidad Guardian and Trinidad Newsday – features well known local singers with Candice Alcantara in the title role as Carmen; Marlon De Bique as Don José; Marvin Smith as Escamillo and Feryal Qudourah as Micaëla. Also among the cast are Richard/Nigel Pierre as Zuñiga; Arnold Phillip/Garfield Washington as Moralès; Jacqueline Smith as Frasquita; Patrice Quammie as Mercédès; Kashif Dennis as Dancaïro; Raguel Gabriel as Remendado; Caroline Taylor and Dwight Lewis in the spoken roles of Lillas Pastia and the Guide. They take the stage again on for their final performance on Friday July, 7:30pm.

The following nights (July 16 and 17), Lesley Lewis-Alleyne makes her debut centrestage as Carmen; Nigel Floyd is Don José; Arnold Phillip is her Escamillo; Natalia Dopwell is Micaëla; with Garfield Washington as Moralès; Richard/Nigel Pierre as Zuñiga; Ayrice Wilson and Llettesha Sylvester as Frasquita and Mercédès; Stephan Hernandez and Errol James as Dancaïro and Remendado; Caroline Taylor and Dwight Lewis in the spoken roles of Lillas Pastia and the Guide.

These award-winning vocalists are joined by a premiere orchestra of local instrumentalists as well as British string players, who arrived in Trinidad last week. “There is a lot of excitement all round,” explains Marionettes Artistic & Musical Director Gretta Taylor. “We had a wonderful experience with our visiting British string players in 2009. Our members learned so much from them, and they were completely stunned by our local talent, and especially the versatility of the steel pan and our musical traditions. We look forward to another cultural exchange with them and are thrilled to present the first production of Carmen featuring our national instrument, the steel pan, integrated with the traditional Western orchestra.”

Discounts are also available for returning patrons (once the produce their ticket stubs to the Box Office), and students also receive discounts of $50–$75 off their ticket purchases.


ABOUT THE MARIONETTES:
Founded in 1964, incorporated as a nonprofit in 2005, and sponsored by bpTT since 1972, the Marionettes Chorale (Hummingbird Medal Gold) is one of the Caribbean's most celebrated choirs, both at home and abroad. In 1995, the Youth Chorale was formed, comprised of boys and girls from over 30 schools throughout Trinidad & Tobago who regularly share the stage with their senior counterparts. Led since 1974 by conductor Gretta Taylor, assistant musical director Susan Dore and secretary and founder member Joanne Mendes, the choirs mount at least two major productions a year, showcasing a repertoire ranging from European Renaissance to Caribbean Folk and Calypso. Web: http://www.marionetteschorale.com