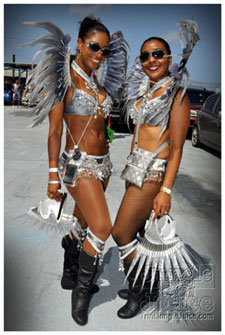 The Mirage Experience
After getting through the for me rather traumatizing Carnival Monday (10 year old boys passionately drinking Hairun, mothers wining on their 4 year old daugters, plenty jumbies and the list goes on...) it was finally time for the highlight of Vincy Carnival 2011: Tuesday Mas (referred to as Mardi Gras in SVG) which included 13 local bands.

The TJJ crew met with Mirage carnival band at 10am at the Bayview car park and started the day with a delicious small breakfast served by Bernice: saltfish balls and yummy Pholourie (split pea balls) with two choices of chutney. The band’s theme this year was “White Darkness” and featured adults sections such Ice Warriors, Diamond Dust, Katabatic Winds, Erebus, Aurora Australis and Illuminance. Kiddies sections were Watermelon Ice and Sun Dogs.

Chipping and wining to the local Soca tunes ... the rather unusual “Sheep” by Gao (winning Road March), “Animal” by Fireman, “Snap Shot” by Shaney Hypez  and “Rave out” by Skinny Fabulous ft Busy Signal were definitely amongst the crowd favorites ... through the main roads of Kingstown.

Mirage crossed the stage quite early in Victoria Park, which included a little wait but offered a quite spacious stage for revelers to present their rather detailed costumes and moves. Mirage Productions placed 4th in the ‘Band of the Year’ competition earning 513 points, with Blondie Bird and Friends “Nature’s Fury” presentation copping 1st place with 552 points. 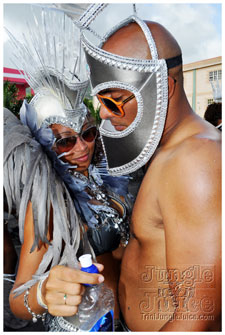 Even after a brief rain shower, we must say we definitely enjoyed the constant supply of rumsickles because the Vincentian sun wasn’t easy! The costumes held up well (I can speak for the Ice Warrior section), the headpiece stayed where it was supposed to stay and feather collars held up even after being exposed to the massive raindrops. In comparison to other small island carnival costumes, Mirage definitely gets two thumbs up for looks and quality.

A welcoming touch were the refreshing spray showers one got from little diffusers along the drinks truck when ordering, a nice alternative to a separate water ‘Cool Zone’.

After a solid morning jump, lunch was served in Bayview car park and Julia Richardson and Vee Jay’s Restaurant offered choices of chicken, pork and fish. Many loyal Mirage masqueraders expressed their satisfaction with this year’s improvement with the food.

The band consisted of 240 adults and 50 kids who after their meals continued the mas through Bay and Back Street, round and round we go! Security was well organized and had definitely more to do once the sun went down. They definitely tried their best to keep the stormers out of the band. The jump up went on till about 8pm. 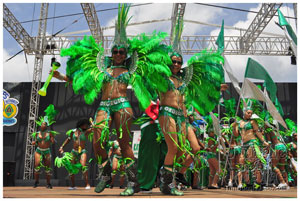 We would like to shout out Becky and the whole Mirage management team, the production team, sponsors and helpers to ensure masqueraders, young and old had an unforgettable experience in St. Vincent.
We don’t have to think twice about which mas band to jump with come Vincy Mas 2012 ... Mirage to the world!!!!!!