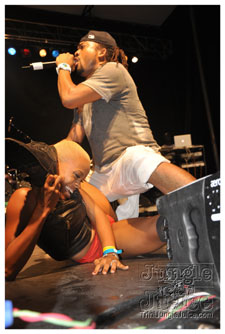 Machel Montano made his highly anticipated Brooklyn debut after 15 years, of touring the world and winning title after title. . . He took this years Soca Monarch title in T&T, and definitely had to ""Come Again"" and give one of his largest supporting fan bases, a show that will be remembered!

The event kicked off an the later evening, on a cool Sunday night. Floyd Bennett field is known for their epic concerts, especially sweet soca and reggae, in the blazing hot New York City summer. We cruised down the highway in search of the entrance to the air strip, that lead to the endless space filled parking lot, that seemed to be a mile away from the entrance and  main stage. We found it easily, only due to familiarity, and valet guided traffic to designated parking spots.

The venue was packed, and the line outside was unbelievable. Machel was due to hit the stage any minute and there were a ton of people still outside but security and other workers did there best to get everyone on the inside with pace. We were attended to and escorted inside. We crept through the maze-like setup to get to the VIP section and access the stage area. There were quiet a few complaints about the setup and the desire for two bars in the VIP section. For 100 bucks...two bars would have been great, especially with the amount of people that chose to party in VIP. . . 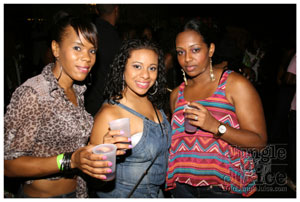 The overall vibe was pretty nice for a Sunday evening. Children were inside the fete on their parents shoulders and wavin their flags as if they know half d songs Machel and the HD Fam perform that night! Machel sang tunes from the decades worth of albums he's put forth, including his Carnival hits "Bend Over", "Coming Again", and "Advantage". He took it back with tunes including "Make Love", "Winning Season", "Higher Than High", "Amnesty" and "Water Flowing", some which were collaborations the performers present to take the stage including, Zan, Patrice Roberts, Farmer Nappy, Kerwin DuBois, and Benjai.

Of course the Machel HD dancers killed it with their endless high energy stage performance. They kept the crowd going wild...especially when Brittany lay down some wining skills to "Bend Over" . . .LAWD! 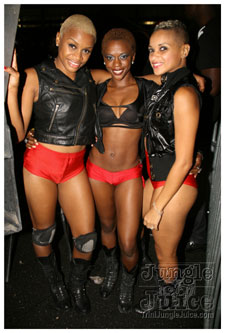 Show was maddd! But could have ended a bit nicer. . . some confetti would have been nice too. After the show ended, it was pretty difficult to get out of VIP. Partygoers were let out one by one, and some were even patted down as they left. Strange and annoying. At least it was pretty easy leaving the parking lot and there was barely traffic. Most partygoers tried to stay back and start a lime in the parking lot.

We absolutely have to show love to GBM for BIB and Mike Samuel for allowing TJJ to be there and be able to represent with them! Machel Back In Brooklyn was a highlight of Independence Day weekend 2011!