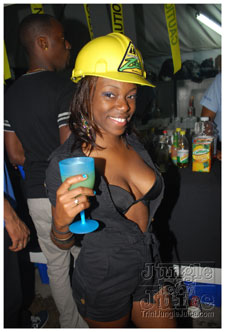 “Learn from Yesterday, Live for Today, & Hope for Tomorrow…”  That was the eco-friendly theme of 2011 edition of Caution.

So with Captain Caution (who was Caution’s version of the wildly popular early 90s cartoon character Captain Planet) at the helm, the TJJ Planeteers with the environment on our minds we made our way back to Bowen Marine in Chaguaramas, Trinidad again for this instalment of Caution – Zero for energy conservation, recycling and zero wastage of the Free Drinks!

Bowen Marine was again transformed into a construction site with yellow caution tape and men at work signs everywhere.  There were also two visually impressive stages built to mimic construction scaffolding, one for the Axe Promotions and the other for the DJs.  But for some reason the TTJ family was not allowed to venture onto the VIP Axe Promotions Stage, while only one media house was allowed to enjoy the “trini view of the scene!”  No scene, we’ll just get out Caution Construction Hats and start to wuk!

It was a good thing that we decided to put safety first because all the women in the fete “Bend Over…” wukking up a storm, wining in circles and were ready to perform! Even Jokey Juice, who is never runs from a challenge, threw caution to the wind to take a wine with a girl who could match “Swappilicious” in size and wining skills!!!

And if vibes were not already good enough ISLANDpeople decided to through in two extra treats with surprise hour long performances from Swappi and 2011 Soca Monarch Champion Machel Montano!  First on stage was Captain Caution who ushered in the performers.  Then Swappi had everyone ready to “Blow My Flute.”  But it was Swappilicious who cleared the stage with her unleashing of that dangerous wine on poor Captain Caution who simply never recovered after that annihilation!  Not to be outdone Machel, accompanied by contortionist dancer Britney, obliterated the party with their infamous “Bend Over” performance!!!

The vibes continued as DJ Assassin kept the party jumping while the drinks continued to flow till the sun began to rise!  In the end with an eco – conscious theme, beautiful crowd and good service Caution – Zero was another well executed ISLANDpeople event.