By Jo-Ann aka Karamel
Published on 10-Jul-11
With the 90 plus degree weather we wasn’t so sure it was a good idea to hit VIP while the sun was still up.  However, we had a job to do, drinks and food to sample so we headed to Hanger 5 @ Floyd Bennett Field.  I was very surprised
>> View VIP 500 Gallery 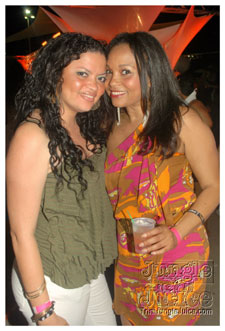 With the 90 plus degree weather we wasn’t so sure it was a good idea to hit VIP while the sun was still up.  However, we had a job to do, drinks and food to sample so we headed to Hanger 5 @ Floyd Bennett Field.  I was very surprised and happy that there were signs as we were driving up to the venue directing us where to go for parking.  This was bringing back some carnival 2011 memories already and the excitement started building. Parking was effortless, there were no lines at the door; even the security were all smiles and welcoming us as we entered.  I’m already impressed and liking what I’m seeing.

As we proceeded to the entrance, we were greeted by a display of Sesame Flyers costumes for their Labor Day 2011 Presentation Brazilia followed by friendly hostesses, a breath taking layout that featured lounge chairs, green carpeting, white tents and last but certainly not least Bartenura Moscato girls serving wine.  Well with these odds, there is no other way for the rest of the night to go but up. There were food stations set up on one end of the venue which featured a Sushi station, Sugarcane Restaurant, Royal Castle Chicken (yes this is one of Back to Basics must haves), Island Burger and the Oyster Man.   Next to the food stations was one of the main bars which were fully stocked. There was also a Johnnie Green Bar and a few cocktail bars stationed throughout the party.  Last but not least, there was a table setup that had tamarind balls, red mango.  I was definitely getting a Beach House feel in Brooklyn and quite a few people commented on feeling the same vibe. 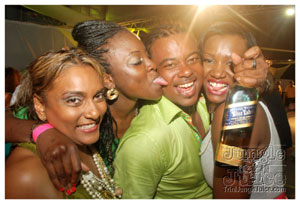 I must say I was really enjoying this vibe and the sentiment was echoed throughout the party.   There was also more than enough seating for those who wanted to sit and enjoy their food.  And can I say there was more than enough food that you could go back for seconds even thirds, or was that just us??lol shhhh For the rest of us who were interested in partying, well let us just say we had the entire tarmac as a dance floor.  Who would think a tarmac can be transformed into a sexy, classy, fun setting.  Kudos to Sunstar Designs (Wayne and Subie) for decking out Hanger 5  we were truly impressed.  So now that the sun had gone down, bellies were filled and heads were nice, the crowd definitely started to let loose, all social behavior went out the door.  To add to the ambiance there were some shot girls walking around giving shots out of something that I want to believe looked like a fire extinguisher.  I have no idea what was in that container but I do know it was tasty. 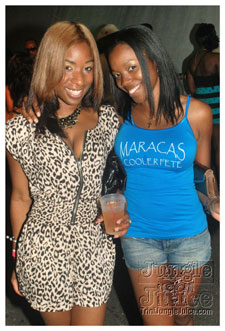 Back to Basics, you need those same girls with whatever was in the canister at your next event. Natural Freaks, Sounds 4 Life, Anonymous, Dr. Wax and Back to Basics kept the crowd going from start to finish and I really have to say I speak for the crowd when I say everyone enjoyed themselves. We really wish this event was on sat night, it was such torture to go to work Monday stale drunk, with a headache and pretend to focus on work. But is was definitely worth it!

With that said, great job Back to Basics and Sesame Flyers for a fantastic event. It’s the best event that TJJ NY has covered to date. TJJ definitely enjoyed ourselves and we are secretly hoping you have another event like this before the summer is over.