Join us for the 3rd Annual Brazilian Day Canada Festival 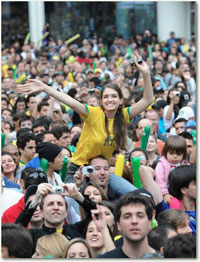 On Labour Day, September 5, a Brazilian Carnival style festival will transform the city of Toronto into Rio north. Booming Samba bands, dancers in beautiful, vibrant costumes and thousands of revelers are expected for Samba in the Square, the third annual Brazilian Day Canada Festival. The free concert and street fair has become the largest Brazilian event in Canada, last year over 70,000 Torontonians and visitors participated. The celebration of Brazilian dance, food and music will climax with a performance by Exaltasamba, Brazil’s most popular Samba and Pagode group.

Brazilian Day is an international celebration of Brazilian culture, sponsored by Globo Television Internacional it is produced locally by Canada’s largest Brazilian Newspaper, Brasil News. Vale is a presenting sponsor of Brazilian Day Canada and OMNI is the Canadian media sponsor. Toronto is the only Canadian stop on the party that will make its way around the globe; celebrations will take place in Luanda, London, Tokyo, New York and Miami.

Street Closure: Yonge Street between Dundas St. and Shuter St. (10am to 11pm)