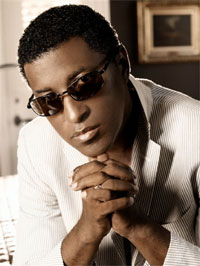 New York, NY - July 16, 2011 - (RAINE PR): The inaugural Reggae Rhythm & Blues Festival is set to rock the millions of residents and visitors from around the world that will be in the Big Apple for Labor Day weekend. Ten-time Grammy Award winner Kenny 'Babyface' Edmonds will headline the first Annual Reggae Rhythm & Blues Festival on Sunday, September 4th at Roy Wilkins Park. This brand-new event promises to be a one-of-a-kind experience that unites music lovers of all ages, while celebrating the City's rich history of cultural diversity.

Iconic American singer, songwriter and producer Kenny "Babyface" Edmonds will headline this year's festival. Edmonds, who has written and produced for mega acts like Michael Jackson, Madonna, Kanye West, and Celine Dion, has generated single and album sales in excess of 500 million units worldwide. He is the recipient of numerous awards, including Soul Train Music Awards, BMI Awards, NAACP Image Awards, and American Music Awards. Kenny "Babyface" Edmonds was the recipient of the third BET Walk of Fame Award, and was named BET's "Entertainer of the Year" at the First Annual BET Awards Ceremony. In February, he received a star on Hollywood's legendary Walk of Fame.

Kenny "Babyface" Edmonds will be joined by Trinidad's 'King of Soca' Machel Montano and Bronx-born, Jamaican-raised roots Reggae star Tarrus Riley. The Festival also marks the return of Jamaican Dancehall giant Mavado, who will be performing in the United States for the first time in over a year.

The Reggae Rhythm & Blues Festival will bring the biggest and best names in American pop and urban music together with the top picks in Caribbean entertainment for a fun-filled outdoor festival that includes Caribbean and American food, crafts, games, and activities for the entire family.

"Carnival weekend in New York is all about celebrating the impact of Caribbean culture in America," says Clarke. "Jamaican Reggae and American R&B share a special kinship - from the R&B roots of Ska, to the Dancehall influenced birth of Hip Hop, both genres have molded, shaped, and defined the landscape of pop music culture on both shores. This concert represents the best of American and Caribbean music. Babyface Edmonds is the greatest R&B singer, songwriter, and Pop and Urban music producer. Mavado is the best of Dancehall, Tarrus Riley is one of the most soulful roots Reggae performers, and Machel Montano is the best Soca artist."