On August 8th 2011, Jahlight Records and Rising Star Orlando Octave team up to bring massive message of hope to the masses with their New Release entitled 'Jah Will Never Let You Down' 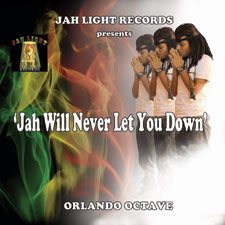 Orlando Octave started music from a tender age. At the age of 10 he won the Promenade Summer Competitions. However, it was in 2004 that he started pursuing a professional career in music and here won the Junior Soca Monarch after teaming up with producer/artist, KMC. In 2007, the world saw Orlando venturing into the world of reggae with his stellar contribution called ‘Darkie’. This was followed by other hit songs like ‘Beautiful’ and ‘Disconnected’, which blazed the airwaves worldwide.

Joined by the likes of his Millionaire family, Orlando released a slew of new songs for, which included the ever popular hit songs such as, ‘Bruk out and Roll’, ‘Pump it Up’ which gained him commendable reviews. For Trinidad’s Carnival 2k11 he even landed a spot in the world renowned, Groovy Soca Monarch. After the Carnival Season, Orlando once again teamed up with producer, ‘Kid’ (one of Sizzla’s engineers) for the tune, ‘So it A Go’.

For his follow up Orlando Octave has teamed up with label, JahLight Records, known for their solid productions as in their New Day Riddim and Mount Zion I Riddim, for his next big release called ‘Jah will never let you down’. This song is strikingly different as Orlando has been known for singing a lot of songs expressing his love for the women. However, here, the world that didn’t know will see another side of the young singer as he pours out a message of hope to those that are facing difficult situations, assuring them that no matter the difficulty, they can call on God (‘Pray’)and He will be there for them. In the song, Orlando also warns us of people that will come in our way to present stumble blocks in our life. His answer to this being, ‘always keep a smile when they want you to frown’. Joined by backup singers and fellow artists, Kerry John and Roxy Singh, his chorus rings out as he instructs the people to, ‘Don’t let them get you down, even if you’re down, Jah will never let you down.’ Backed by JahLight Records’ energetic riddim, the song is absolutely beautiful in expression, vocal and lyrical ability.

‘It is a privilege to put out a record with Orlando Octave. We at JahLight Records are excited about this project for it’s an opportunity to spread a positive and uplifting message to the world especially as our team along with Orlando Octave see ourselves as role models to this generation. We intend to make the best of this opportunity for the honour and glory of God’. We would like to thank God most of all and all those that help put this work together. We hope to inspire the people to keep the faith in the Lord despite opposition and trials in life. Know that with God, anything is possible. So seek God first and everything else shall be added unto you,’ says JahLight Records manager, Akeunde Pemberton.

The song was mixed by Kendal Arnold, executively produced by Akeunde Pemberton and Sherlon Jackson, whilst mastering was provided by Gary Surtherland, engineer, of the legendary Tuff Gong International in Jamaica. The song will be released on digital stores worldwide by the world’s largest digital distributor of Reggae music, Zojak Worldwide, on August 8th 2011. So do look out for this one as Orlando Octave and JahLight Records join forces for a positive endeavor as they reassure the world that, ‘Jah will never let you down.’

Orlando Octave - Jah Will Never Let You Down
http://www.youtube.com/watch?v=5pnimDtQ0ss

1 Response to "On August 8th 2011, Jahlight Records and Rising Star Orlando Octave team up to bring massive message of hope to the masses with their New Release entitled 'Jah Will Never Let You Down'"