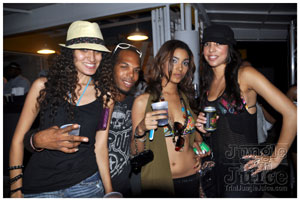 After 15 years it was finally time for the next evolutionary stage of the wildly popular annual Carnival Sunday night party Mania to become Cooler-Mania!  So what’s the difference with Cooler-Mania?

First of all it’s a cooler event, so no free drinks all night long; but at least you can walk with your own once you arrive before 1 am!  Second there are no Four of the Biggest Soca Bands performing, so no Machel; but maybe there would be a surprise or two as I swear that I just saw Jade, Britney and the rest of the HD Dancers in the crowd!!  And finally after Mania you would have to make a long trek from Trinidad Country Club to your respective band to enjoy J’ouvert; well with Cooler Mania there’s no need to journey anywhere as there is supposed to be a J’ouvert In July after party jump-up from the O2 Park in Chaguaramas, Trinidad!!!
Carded as a J’ouvert party it was no surprise that the party started off a bit slow after the gates opened at 11 pm.  With another J’ouvert Party – Cocoa Devils just a stone throw away we will soon find out where crowd goes.  But you know the TJJ Family has always had the moral obligation to bring you all the news and views on T&T culture showcased around the world, so yuh know dat we hitting both fetes!!! 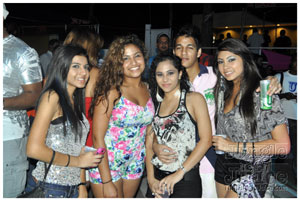 The crowds eventually came by 2 am and then it was time for the first surprise performance from Farmer Nappy who belted out his Groovy Soca repertoire of hits from yesteryear.  Unfortunately his performance may have put the crowd to sleep as no one tried to “Flirt,” chip on the “Pavement,” or even dance like a “Belly Dancer!”

Immediately after it was Swappi in 3D to the rescue as he made everyone “Blow My Flute!” He followed with “Dis Gyal” which marked the return of his contortionist dancer Chookaloonks who showed everyone that not only HD dancer Britney can make a vertical split and then land flat on the ground while still holding the split.  Finally it was time to bring the house down with “Mi Nah go Play” as two tonnes of agile fun Swappilicious entered onto the stage and demonstrated that she too could do splits, wine to the ground and even pick up a skinny male dancer while reversing the dancing roles!

DJ Rapid Response kept the energy and excitement going as he unleashed hit after hit forcing some partygoers to retreat to the Digicel Cool Zone to catch their breath.  Then with little encouragement from DJ Rapid Response, HD Dancer Britney appeared on stage proceeded to perform when she suddenly went flat on her back with legs behind her head demonstrating that SHE was truly Trinidad’s Human Pretzel.  I must say that since she wore tiny white shorts that nothing was left to the imagination when she was in this position!  It was not until her fellow HD Dancer husband jokingly ran on stage, lifted her and threw her over his shoulder that the exotic dancing was over! 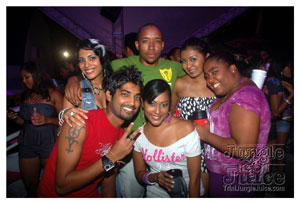 As the sun began to rise the party evolved one more time as fire hoses unleashed their watery wrath changing Cooler Mania in to a Wet Fete!  The vibes continued as DJ High Fidelity kept the party jumping till 6 am!  In the end the was no street jump-up but good vibes and decent crowd Cooler-Mania will only evolve into something better the next time around.