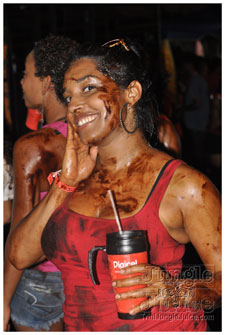 “The stage is in front of us ... Time to get Advantageous!”

No I’m not having a flashback to carnival 2k11 merely to Cocoa Devils awesome summer j’ouvert bacchanal which this year included a stage! Yes you heard right. We entered Pier 2 to find that the masses had already converged on the bar area and were getting warmed up with some drinks. In the midst of this cocoa men were walking around with buckets and helping scantily clad ladies to apply cocoa wherever they wanted on their bodies. I’m sure they hated this job. After a couple drinks, the DJ announced the truck would be taking off. The band of dutty revelers chipped behind the truck down “Ariapita Avenue” and “Charlotte Street” and those of us who have been coming to this fete since the beginning were familiar with the naming of sections of Pier 2 after the streets of Port of Spain. This year however we were pleasantly surprised to find a real stage at the end of “Charlotte Street”! 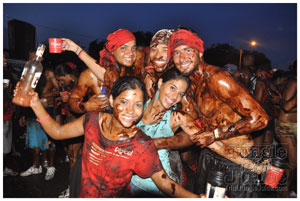 The adrenaline was built up almost as much as Carnival Tuesday as the security held masqueraders back to make them cross in sections. Machel’s stage crossing anthem belted out from the big truck speakers and if you closed your eyes and imagined hot sun you would swear you were on the Savannah stage. After the eventful stage crossing it was time to hit the bar again for a refill. And what a pleasure that was since the bar was well stocked and staffed so waiting for drinks was never an issue. If you didn’t feel to trek to the bar there was a drinks truck as well as shot stations strategically placed throughout the dance. As the fete continued, patrons had the option to chip alongside the DJ on the truck as he played soca hit after hit or to stay put and wine on the spot as there were speakers located close to the bar. 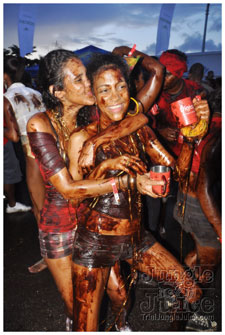 J’ouvert lovers across the world know that no feeling can compare to getting dirty and well getting on dirty. Of course the behaviour that took place on Sunday morning was telling of this. After a quick bite to eat from the doubles man it was back to the pumpin’. We hit up the Digicel VIP area, which was merely some decorated scaffolding, but after a few drinks even that was fun. As the sun came up, out came the hose and there’s no better climax to a j’ouvert party than water! Dirty, wet, full and happy we left the party wanting more but knowing that there is such a thing as too much of a good thing.  All we can say is thank goodness the days of waiting a whole year to enjoy j’ouvert are long gone.