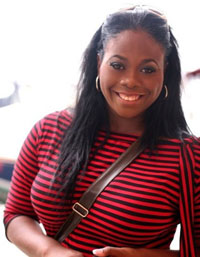 Port-of-Spain, Trinidad. July 25, 2011 - Nadia Batson’s journey to creating a new sound in the Caribbean has gained tremendous momentum. On July 17, auditions held at the Centre Of Excellence in Trinidad, proved successful with a number of beautiful and talented young women presenting themselves to the team of musical experts who would have the final say as to who would fill the spots of keyboardist, vocalists, drummer, bassist, guitarist and dancers.

In a statement following the one- day audition, Batson excitedly said, “There were some really talented women today. It’ll be a hard decision but we’re up for it.”

Some eight to 10 girls will be chosen to be a part of the “My Posse” singer/ songwriter’s new all-female soca band. She anticipates it’s full emergence by late November and has assured that she will not deliver anything less than the best to the public at large. For now though, Batson continues to fulfill her professional obligations with Kes The Band, having flown to Toronto on Thursday for gigs there.

Upon her return, Batson will begin rehearsals with the new ladies of soca and she’ll also be prepared to reveal the name of the all-female band. Thus far, her announcement has created a surge of excitement within the carnival fraternity as fans, promoters and prospective sponsors eagerly await the grand showcase of what Batson herself is referring to as the hottest thing since carnival bikinis and beads.