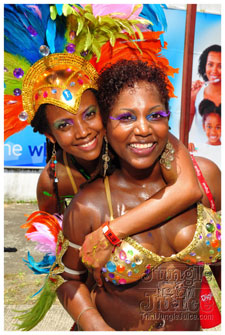 Carnival Tuesday, on the road again. And yes here in St Lucia we are jumping both days in full costume…well let’s say on Tuesday you jump with whatever is left from the day before.

The three unfortunate bands that didn’t get to cross the stage in front the judges on carnival Monday had the chance on Tuesday and the sequence of bands was changed accordingly.

Even on Tuesday the weather didn’t change and the revellers had to cope with blazing temperatures, thank you Red Unlimited again for the wet zones and foam truck (sigh of relief)…
So even with a few embellishments and accessories missing, the band was still a pretty sight and quite a few female band members made efforts to match their make up to their costume adding decorative swirls and rhinestone patterns on cheeks, temples and eyebrows. 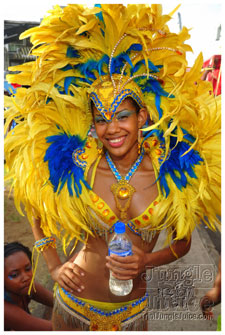 Soca tunes were mostly local with a few Trinidadian songs (“Wotless” definitely caused aaaahhhh and ooohhhhs) mixed in from time to time.
The security guards of Red Unlimited were definitely special…the plastic ropes were never lifted for anyone with a large headpiece and also caused minor burns if not being watched carefully. The trucks sometimes came up scarily close to revelers backsides and no one told you calmly to move forward or watch out.

Instead some of the security staff members started pushing band members, which caused a few discussions. Especially maneuvering the truck and band safely through the smaller roads after passing the market was a challenge, but no matter how difficult it is…etiquette should be kept and proper communication is essential. Hopefully next year the security employees will be a bit gentler with the masqueraders. 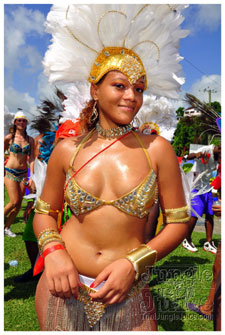 After making a whole round through town and enjoying an incident free jump up, band members left town in the early evening hours…rum in their heads and a tan on their backs.

Popots loves to wine and roam, being naughty in de foam!