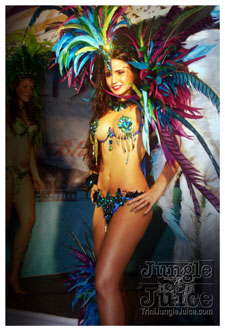 BLISS, the new all-inclusive Carnival Band heading into its second year launched its Carnival presentation - Destination Bliss 2012 held at Ipanema Restaurant and Lounge 12 Victoria Avenue, Port of Spain. On getting to the venue there were security and ushers directing specially invited guests to park their vehicles at Tranquility Government Secondary Schools compound just a stone throw away. As guests entered the courtyard of Ipanema, they were treated with punch from petit young ladies. Now Ipanema restaurant is a newly opened restaurant. Business commenced approximately two months prior to the Bands Launch enveloped in its Victorian styled layout which was once owned by the Seigert family of Angostura fame. You could have seen Executive Chef Yvan Acquing mingling among the guest.

(for more on the Launch of Ipanema Restaurant and Lounge see Tjj coverage http://www.trinijunglejuice.com/photos/2011/trinidad/ipanema_launch_jun11/)

Around 7:00 p.m. the venue was quickly filling up as invited guest enjoyed drinks from the well stocked bar and socialized with the sounds of Dj Marvin until the presentation started. Then it was handed over to the ‘capable hands of Dj Private Ryan’. There were eight sections displayed on the night:- 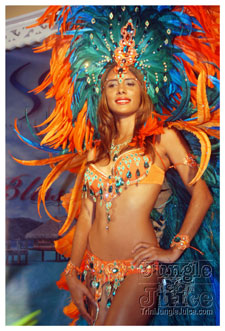 First presented on the stage out in the courtyard and then moved inside the lounge area. After guests, committee members and the band leaders were seen partying to the wee hours of the morning. Destination Bliss the Intimate Carnival Experience.
Cass Stuart was there!!