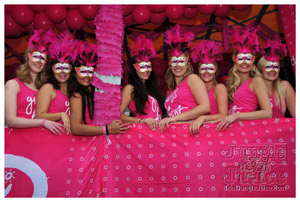 I Plannin' To Stop Take Photos And Plant Peas In Rotterdam ...

Unfortunately when Carnival and Parades were discovered, it was always inevitable for more than one Carnival Season/Festival to clash on an international scale. It was purely inevitable! However, in order to discover the true weight of your excitement levels and the deepness of your love for a Carnival Season you as a human being or a costume wearing masquerader could only choose one location to be in at any one time and it is of great pleasure that I strongly recommend Rotterdam Summer Carnival also known as Zomer Carnival. 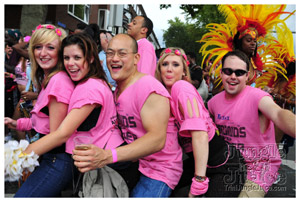 This year I blatantly decided that after a festive Rotterdam Carnival 2010, I will definitely attend 2011 again and totally ignore the others whose name I shall not mention. So for me the hero is a splendid european country with fabulous and gorgeous looking people. The mixture of caribbean and european culture is one of the best things present at this parade and with that being said the beautifully psychotic soca corrupted most trinidadian infused mas band in the Rotterdam Parade is TriniConnections who usually teams up with PoisonUK. It is about the most charismatic mas band in the parade. There are the usual characters in the mas band who do not miss Zomer at all and then you have the new people on the block who turn into the funniest characters that you’ll ever meet. Welcome to Rotterdam Carnival, I say!  I believe this is one carnival parade/mas band where no good deed goes unpunished by a wine. Rotterdam really takes a switchblade to the face of a carnival parade conformity and carves a work of twisted beauty out of it. 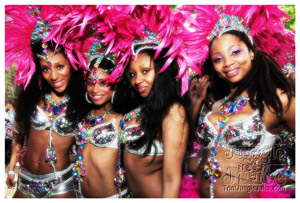 The weather was totally unpredictable today - The sun was shining, people were sweating, and we were having a blast... a complete blast! Then the rain! Oh Then The Rain! Not Once ... Not Twice ... Three Times. Heaven In Netherlands. Masqueraders had fun no matter what the weather was producing. Both Triniconnections and PoisonUK! With respect to drinks, all I have to say ... it cannot finish! Alcohol was left at the end of the parade and it was what you really should call "inclusive"!! There were ah few Carnival Jumbies with the actual bottle of spirit in their hands - for example the bottle of Hennessy ... the bag of Puncheon ... the gallon of Courvoisier ... Poison Is Poison!!

The DJs on the truck today - I am not sure of their names because I am not a groupie - however, I will give them credit for keeping the vibe nice - keep the road pumping! It was not that hard anyway, to be honest, with 2011 being one of the pinnacle years for soca in the history of soca ever!! Lets not forget as well, Palance seems to always be a recurring decimal on the soca history industry because like water to chocolate or like milk to a pepper mouth ... it always causes a great sense of entertainment & excitement ... Come In Baby! ...  We inside like mud!!!! Come in - the water nice!!!!!

With me on the road alone, the entire parade was full with beautifully dressed and physically gorgeous women! The TriniConnections band ... My Gosh ... I was turned on by some blue paint! Jab Jab Posse win! The friendly people were in mass abundance even in the other sections on the road - for example, the childrens band had some really friendly people who just loved getting their picture taken.

WE LOVE MAS AND LOVE THE PEOPLE WHO PLAY MAS, how they gyrate, all different versions of wining and all sorts of locations and even on all sorts of foreign objects. There was this particular hood of a van that was violated by a smallie's waistline and her batty movements!! The road itself - the hard pitch was often a "bed" so to speak .... you know how it is behind closed doors. I just love the conviction and love in which some people look at each other when they are dancing on each other OR when a woman is wining and holding ah man's head and singing to the music ... it's classic! It's love man!! Women being picked up off the ground is always a superb move too ... it was just great entertainment all round, yes!