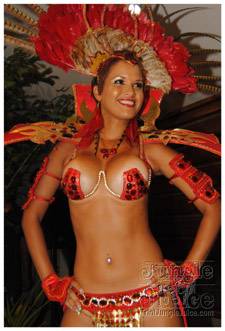 Japan in Trinidad! Oasis has launched their 7 sections for carnival 2012 with the theme, Nippon (Land of the Rising Sun). I don't think Japanese women can compare to the sexy chicks we have in Trinidad but we Trinis sure can pull off the Japanese look with all the carnival appeal. The only thing purely trini about the launch was the timing, because the launch was scheduled for 11pm and in Trini time, that's a good hour later, but after seeing the costume lines, it was definitely worth the wait.

CROWD:
Walking into Anchorage felt like coming off a plane in Japan, beautifully decorated with two pretty Japanese girls to greet you. The setup was clean, roomy, and the stage layout was done so everyone can take a good look at the costumes. There was also secured parking readily available just a short walk away, making Anchorage an ideal place for the launch.

VENUE/ACCESSIBILITY:
Oasis promised "An Energetic, Explosive Night You Will Never Forget", and that it was... Djs High Fidelity, Less Than Zero, Private Ryan And Devon, And Shot Master J. And of course, the night would not be complete without a live performance by Swappi who had the crowd going wild with his performance. 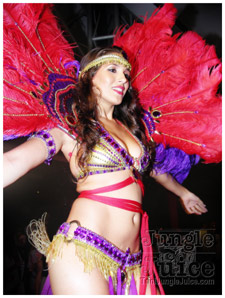 VIBE:
Two for one specials on premium drinks with a well stocked bar. The chit system was effective since there were no big lines or keepbacks. Also, there were Baileys and other companies giving out free drinks throughout the night.

For more information or to sign up for this band, visit http://www.oasiscarnival.com