By Ania O.
Published on 12-Aug-11
It has been 7 years since Island People Mas brought to you all their first costume theme -  Enchanted Forest. After that you have already seen: Sahara, Animal Instincts, Heaven on Earth, Kutchela and Shades of Universe, this time they will extract ‘Heroes’ that reside ...
>> View ISLANDPeople Mas Band Launch 2012 "Heroes" Gallery 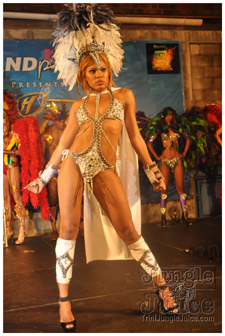 It has been 7 years since Island People Mas brought to you all their first costume theme -  Enchanted Forest. After that you have already seen: Sahara, Animal Instincts, Heaven on Earth, Kutchela and Shades of Universe, this time they will extract ‘Heroes’ that reside within us.

As IP claim: We all are island people and in carnival 2012 we all can become Heroes because ‘it’s in all of us’!

From the time we entered the venue I let myself feel like a lady and walk around with a champagne glass filled with pink Nuvo. Made my way to VIP section and happily continued to watch special costume presentation for media only. It was quite early but time flies when you are having fun so soon enough place was filled by island people waiting to get loose and wine. Except for few problems with the sound when the music stopped and everyone was looking around feeling awkward, it went smooth including the costume presentation.

It takes courage and creativity to think outside the box and do something different in a different way. Island People Mas stepped out of the box and brought something original. Better or worse? It’s for you all to judge. It also takes courage and wide open eyes to admit that originality is a quality and be able to embrace it, especially where the idea of carnival band launch and carnival costumes is deeply rooted in the minds of the people. 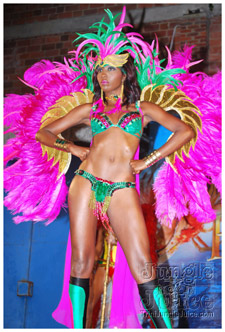 So here they were, the Island People Heroes presenting to you costumes through  choreographed costume presentation with specifically designed music background with special sound effects and models playing roles of the heroes fighting off the villains. I’m sure it took a lot of work to prepare this presentation and it paid off.

On top of this we were treated to some music performances by Nabula 868 and Swappi who performed on the stage full of costume wearing models. Very  interesting concept. Like I said, thinking outside the box!

So which hero would you like to become?
Nocturnal – Eradicator of Dark Deeds
Wildheart – Feline Crime Fighter
Or
Fiyah – Wisdom of the Wilds

There are 11 types of heroes to choose from! Go ahead and pick one!