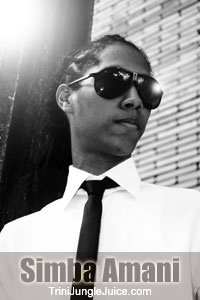 Simba who made his debut track called "Hello" back in 2009 which received much love from us here at the BOOM CHAMPIONS, continues to emerge on the music scene as an artiste that one should not underestimate. Recently he has premiered his first official music video for a track entitled “Hold My Peace” directed by Hans Des Vignes and is still launching the track and video on various radio stations and media nationwide and abroad.

The 22 year old singer/song writer has signed a management deal with Schizophrenic Entertainment and is already working on new projects such as “She Knows,” a new song with a dancehall mix that shows his versatility as well as events that would be announced. In addition, Simba has linked with one of Jamaica’s most renowned reggae producers, Kemar Mcgregor known for works such as Gyptian’s “Beautiful Lady” and several hits from Beres Hammond and other big names. Together they are working on a project that would then be marketed throughout North America, Europe and Africa.

Simba Amani describes himself as a unique individual as he does not try to emulate anyone else; he is simply “himself” and that would be brought forward through his music. “I’m a youth with a broad personality, I’m open minded, never afraid to express myself and I always maintain love and respect for all people as long as they don’t cross the line with me.”