Jamaican Film "Out The Gate" Comes To Atlanta 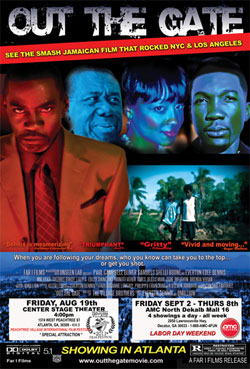 The movie, starring two of Jamaica’s most legenday actors, Campbell and Samuels, boasts appearances by dancehall deejay Mr. Lexx, Lady G, Edley Shine of Born Jamaricans, and features a strong musical soundtrack including numbers from Beenie Man, Jadakiss, Busy Signal, Styles P, Turbulance, E-Dee and more. Directed by the Village Brothers and shot on location in Jamaica and Los Angeles, this feature length film has had audiences in New York and LA on the edge of their seats, shouting, laughing and cheering in response to the first Jamaican movie to hit movie theaters in America in a long time. Reggae historian Roger Steffens described the movie as “… a vivid and moving reflection of the flagrant joy of musical creativity of our Jamaican cousins.”

More dates are soon to be announced for the film to continue on to Jamaica, Miami, Toronto, London and other international markets. The film produced and distributed by Far I Films, appears to be on its way to becoming a classic.

For showtimes, theater info, and to view the trailer visit www.outthegatemovie.com