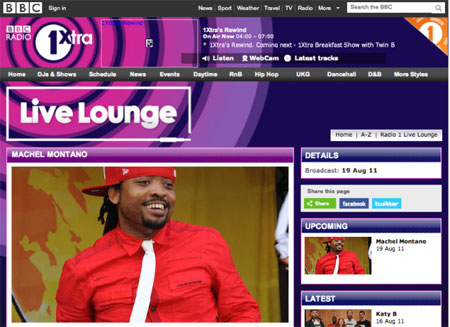 "The Live Lounge" is one of the most recognizable features in British radio and has previously seen the likes of Lady Gaga, Bruno Mars, Jay Z and the rest of the biggest names in music taking part in it.

This is a three (3) track session where Machel will play two (2) original songs and one (1) cover version. Live Lounge is at the world famous BBC Maida Vale Studios which has seen sessions recorded from Frank Sinatra and Bob Marley to name a few, it will be a landmark event for a Soca Artiste to do a live Lounge session.

This broadcast of Machel's session will be aired on Friday 19th August 2011, at 6am EST, 11am UK Time. ahead of Machel's appearance at the first 3 day Caribbean festival to take place in London -"The CALO Festival" which runs from August 19-21, 2011. Machel Montano and Team HD will be performing on the Saturday 20th, along with such acts as Luciano, Dil-e-Nadan, Skinny Fabulous, Rikki Jai and many other great Caribbean Artistes.

For more on "The Live Lounge" log on to: www.bbc.co.uk/radio1/livelounge/ for exact schedule time and information as well as streaming video.