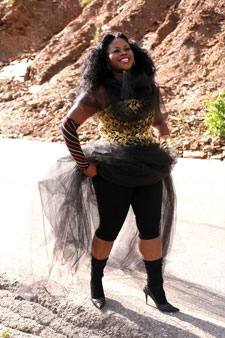 Port-of-Spain, Trinidad. August 19, 2011 - Nobody could possibly understand the excitement happening within camp Batson as it’s being called these days. Phone calls, emails and social networking interactions are keeping Nadia Batson very busy as she continues on her journey to creating the first ever all female soca band. She says she’s been inundated by correspondence from interested photographers, clothing, hair and makeup stylists and even personal assistants who want to be a part of the gig.

With a smile Nadie B’s taking each day as it comes, aggressively putting together her band of women, all of whom she’s fondly expressed satisfaction with. “My ladies are great!” “My girls SOCA!!!,” she laughed. It’s Nadia’s way of indicating that her girls are hot in their very own Caribbean genre. It’s been a beautifully crazy ride so far. Rehearsals started with the band members upon Batson’s return from Toronto in early August and since that time, the Caribbean Girl songstress has expressed a very high level of satisfaction via Twitter, Facebook and other social networking mediums. Admitting that the task is no easy one, Batson says she’s currently ensuring that the girls are glammed up in time for a launch in November. Musically, she says she has no big problems, as the ladies are all incredibly talented and know their stuff.

With a lot happening on the financial front in T&T right now, Batson is bent on reassuring corporate entities, promoters and supporters in general, that what she’s about to bring to the market is certainly worth their dollar. Her team understands the state of the international economy and how that translates locally when it comes to budgeting so she’s working even harder to guarantee a top-notch product ahead of C2K12. Her assurance to everyone is quite simple, “There has never been anything like this in Soca. This will be the biggest thing in 2012-I assure you. We’re coming with glam, vibes, motion and real entertainment from the start to the finish of each set. You’ve gotta make us one of your top picks when it comes to soca bands this coming carnival.”