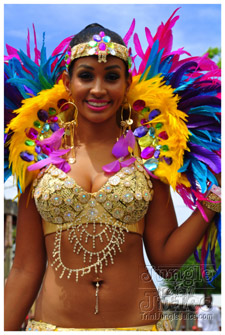 On the Road with Baje International

Meeting point and route were the same like the year before (see coverage) with one big difference: the weather! After jumping plenty carnivals all over the globe for the past 3 years I have never experienced such a wet Road March. Within 2 minutes beautifully decorated winged frontline costumes turned into a gooey mess that stained revelers skin. Unless you joined the band super late, or deposited your headpieces and wings in a cabin of a truck, there was no chance you wouldn’t look like a wet chicken during Kadooment 2011.

All the time and effort spent on make up and rhinestone application... for nothing! BUT, I must say alcohol helped... it kept you warm (cause that Bajan rain was icy) and also started cheering you up after the 3rd or 4th serving... who cares about rhinestones anyway right? Jones and Wukup ... that’s all that matters!! The vibe got much better around midday and we got a break from the weather Gods. 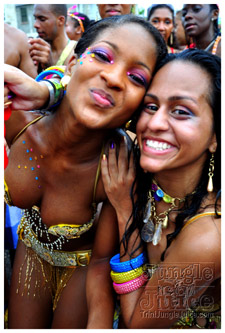 While chipping through the streets it was nice to see some local kids being dressed and showing off some of their own choreographies to this years tunes, biggest ones by Lil Rick, Alison Hinds, Big Red and Rupee. The latter definitely followed in Benjai's footsteps with the Bajan version of “Trini”.

While “I’m a Bajan” was blasting from the trucks all the muscly packed pretty boys from the island tensed their pecks. I think I have never seen more bodybuilders with flags airbrushed on their chest and backs than in Baje International. And I also have never seen so many male revelers behaving so tame... it seemed they were more interested in walking along with their buddies than giving a girl a good juk... what's that about? I don’t want to generalize, maybe I was just at the wrong end of the band? Correct me if I am wrong! 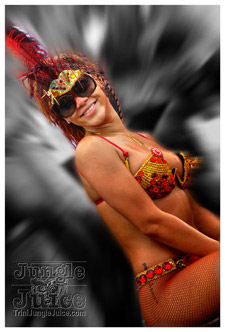 All in all, it was a nice jump up. Service on the trucks was good, music kept going and even Bajan international pop star Rihanna seemed to have a blast waving and blowing kisses from one of the Baje trucks. It was definitely nice to see her showing her island some love and I trust people appreciated her being so close to the crowd without 10 bodyguards around.

Early afternoon it was time for a yummy lunch which also meant the end of Kadooment Day 2011. It's always a very abrupt ending in my opinion because usually 2-3pm is the time when your head is the nicest and that is when the fun stops in Barbados... what ever happened to the plans to have a 2-day Kadooment? TJJ (and rest of us carnival lovers) is definitely for that!

Nina"Popots staring at pecks so lush... scared to touch, damn you airbrush!"