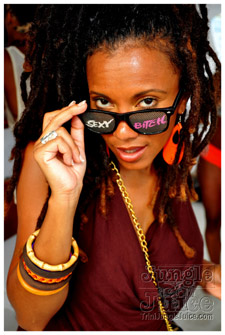 This Ting cyah be ova, cyah be ova !!!! And it was definitely not over, Grand Kadooment was done (unfortunately way too fast, 6 hours of jump up only !!! *heavy sigh*), but Crop Over festivities were still on air and that Tuesday we were ready to Jones and Wukkup one more time on the Jammin’ catamaran for the private boat ride organised by our friend AJ.

AJ (former "106 & Park" host and "Extra" correspondent) was coming back again with his COOL DOWN CRUISE. But you better knew two words about this one ... "Invitation ONLY"!!
By the time we reached the Jammin’ Catamaran Cruises office at the BTI Carpark, downtown Bridgetown, it was around 2:30pm. People and sexy girls were already waiting to board the catamaran, sun was blazing outside, really hot hot hot after a soaking wet Kadooment Day (Camille thank you for offering us some shade and A/C inside your office). 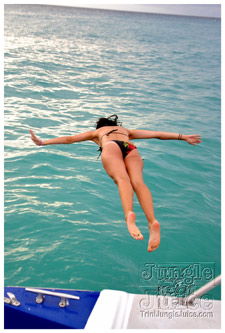 Anyway we boarded the Cat’ 45 minutes after our arrival ... For our first time on the cruise, Daddy Juice and myself didn’t really know what to expect, but seeing the beautiful people around, some famous artists on board (Alison Hinds, Nard, Mister ‘6:30 and tek dis juk’ Big Red, and Jeanille Bonneterre), a 3 to 1 woman to man ratio, we were already happy to be on water, that cruise couldn’t go wrong. The boat took a North direction along the coast of Barbados, such a nice background, the sea was a lil “shaky” due to the tropical storm swell, but it was nothing too bad.

The music was kind relaxing at the beginning with some old tunes, the calm before the storm ... waiting for some more pressure, it was nice to sip some good drinks and have a chat with friends or faces that we saw all along the crop over weekend. The bar service was on poppin’ and so was the music with some U.S. and Caribbean vibes, the crowd started to break the ice, and enjoy the cool down cruise.

COOL DOWN CRUISE, mmmmmm not for long, some people wukking up over there, some juk juk that side, some 6:30 this side, oh goshhh good vibes, everybody on fire, the cruise was officially on party mode. 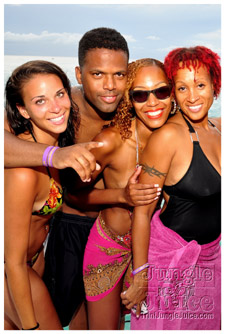 The captain stopped the catamaran and put the anchor by a nice beach around 4:30 or 5pm (cyah really remember, let’s blame it on the drinks). We all took a swim to cool down in the beautiful crystal water of Barbados ! We were definitely in heaven. After a swim, some stylish jump diving, and a long stop (maybe too long), We headed back to Bridgetown on sunset, the ambiance was blasting, jonesin’ n wukkin’ up, six thirtin’ all the way back  … Barbados Crop Over "The Sweetest Summer Festival", you definitely OWN this status,  thank you for your MONSTERRIFIC cruises, you are THE #1 Island of Boat Rides!!

AJ, your Cool Down Cruise was intimate and great. Thumbs up for the selection of people, the music, the service and  the vibes... but most of all thanks for the invitation.
-De Camel @ Jones and Wukkup.com