By TJJ Admin
Published on 05-Sep-11
Island Pop has been the hot buzzword circulating on the tongues of who’s who on the TnT music scene for the past few months. However, unknown to many listeners they have been happily grooving to this brand new genre of local music since Carnival 2011. The Electro Lights Riddim, created by ...
Written by Mystie Thongs 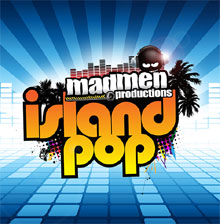 Island Pop has been the hot buzzword circulating on the tongues of who’s who on the TnT music scene for the past few months.

However, unknown to many listeners they have been happily grooving to this brand new genre of local music since Carnival 2011. The Electro Lights Riddim, created by our very own MadMen was the true start of this evolutionary upgrade in Soca music.

But then what exactly is Island Pop, and how did this irresistible vibe come about?

“Well Island Pop is really the fusion of our music, culture, style with popular music and/or dance music. The island part could be just the artiste’s voice with our unique accent on a pop track, but for us, it is mainly when we fuse the drums, bass, the kick, the percussion, our way of doing that with pop, house, and dance music, to make this new sound that is still very us but musically available and enticing to the world market, “ explains Johann ‘MadMan’ Seaton.

The seeds of Island Pop were actually planted last year while Kees Dieffenthaller of KesTheBand was in MadMen’s studio putting together the band’s newest album Stereotype. Kees and Johann worked with a lot of Pop music and the process inspired the MadMen to try something new and never done before for the Carnival season.

After much back and forth among the MadMen team, the Electro Lights Riddim was born. They knew the sound was unique as well as very catchy, but worried that it may have been rejected by the notoriously critical TnT Soca crowd. For the riddim to be embraced, it required local professionals who could share the team’s vision of bringing our music to international standards, but who were still so authentically ‘Trini’ that the audience would at least give it a chance.

Calling Kees was a no-brainer, but seeking out Machel Montano was a little more risky. However, when Machel heard the riddim and spoke to Johann, he quickly realized that this was truly the way forward if Soca music was to ever permanently hold its own well-earned place in the ears of the world music audience. Both artistes felt the future as they listened to what the MadMen had produced.

The phenomenal popularity of the riddim for Carnival 2011 and beyond speaks volumes.

Johann excitedly proclaimed, “It has been Fantastic! Both Kees and Machel are on tour right now and all over the U.S. and in the UK, people are responding very enthusiastically to ‘Where Yuh From’ and ‘AOA’... which tells us we are on the right track to take this as we always say To The World!”

Having now found the formula to truly and lastingly place Soca music on the international stage, the MadMen are fervently working to step up their musical game even more. “We know Trinis, we cannot come with the same thing next year, I mean Trinis will push you to be the best possible, if you let them... they do not let you settle at all!” Johann continued, “So next year we want everyone to be prepared for... MadMen The Upgrade! New music, even more artistes, and always a higher quality of musical standard with each new song we put out.”

The MadMen openly revealed that it has taken six years of trial and error for them to get to the point where their musical diversity and intensity could create the sound that is Island Pop. Ever persistent though, the focus of the work was always on taking Soca out of a two month window of time for the year and building it into year round music that was wanted and appreciated not just by those who grew up with it, but also by people who have never heard of Soca before.

As with all new things there are critics to this progression of Soca, which is appreciated by the guys, as they see it as a way to keep themselves grounded while ensuring that they always keep a steadfast hold to their roots as they grow. Johann wanted one thing to be clear, "To us, what we have here in TnT, our music is something that could stand up and excel next to the best the world has to offer. But, it is not enough to just keep doing the same type of festival songs year after year, music is about growth and challenging yourself to be and do more..."

With this in mind, the team wants its supporters to expect and listen out for favourite artistes of theirs like, Maximus Dan aka Mx Prime, Destra, and Umi Marcano, alongside Machel and Kees, on new MadMen produced Island Pop releases within the next few months. These will be the pioneering voices that carry this new genre beyond the Caribbean Music Diaspora to all of the melodic corners of the earth… A journey that the MadMen promise their fans, they will be able to follow all the way through.