Coco Tea Releases Eagerly Anticipated Album, Yes We Can, On November 4th To Coincide With Us Elections 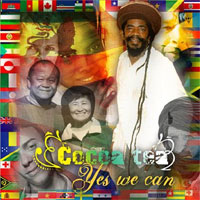 (October 22, 2008 - Miami, Florida) Zojak World Wide, the leader in digital distribution, in cooperation with Coco Tea's Roaring Lion Records, is pleased to announce the release of Coco Tea's eagerly anticipated album, YES WE CAN.  The album will be available worldwide on I-Tunes and www.cocoateabarackobama.com the same day as the US elections, November 4, 2008.  YES WE CAN burnishes Coco Tea's credentials as a foundation reggae storyteller, mixing smart social commentary, life experience and musical talent in a way that both soothes and empowers.  Featuring renowned music-makers, saxophonist Dean Fraser, the Firehouse band and famed producer Bobby Digital as well as Coco Tea's own productions, YES WE CAN is meticulously assembled, track for track.  Led by his hit single, "Barack Obama", Coco Tea is joined on the album by an-all star cast of reggae pioneers - Marcia Griffiths, Shabba Ranks, Cutty Ranks, El General and Prezident Brown.  Combining modern melodies, live instrumentals and timeless roots bass lines with crucial vocals over 14 tracks, YES WE CAN is essential Coco Tea.

Deeply affected by local and international issues, Coco Tea has sought to craft an album focused on meaningful day-to-day concerns, from politics, to love to personal and community well-being.  The lead single, "Barack Obama", did just that, winning Coco Tea television appearances on CNN and FOX News as well as interviews with the BBC, the Wall Street Journal, the New York Times and New York Post for its participatory message, catchy music and unique Jamaican perspective.  The follow up single and title track, "Yes We Can" is a non-partisan call for unity between people of all political affiliations, races and classes.  And "Time Is Red" (featuring Shabba Ranks), is a cool and deadly combination with the original Grammy winner in which the singer gracefully weaves his lyrical magic between the edgy speech of the deejay on top of a wicked one-drop riddim from Bobby Digital.

YES WE CAN is not all seriousness and dread however.  "I Swear" and "Love Is Not To Play" prove Coco Tea is still a player in the lovers game.  The duet with Marcia Griffiths, "Real Men", is just one of the standout tracks which captures the charisma and passion of these veteran artists.  Coco Tea's musical creativity is also on display with refreshing covers of two timeless reggae classics, "Smiling Faces" by John Holt and Horace Andy's "I May Never".  Here, Coco Tea brings new word play and saxophonist Dean Frazer's superb saxophone solos to make them his own on these updated versions.

A one time racehorse jockey, Coco Tea has been riding a wave of success with foundation dancehall tracks for Henry 'Junjo' Lawes in the 80s ("Rocking Dolly", "I Lost My Sonia") and roots anthems in the 90s ("Riker's Island", "Holy Mount Zion").  With over twenty years in the business and more than 50 albums to his credit, Cocoa Tea maintains his position as a leading voice for culture and consciousness in dancehall reggae.