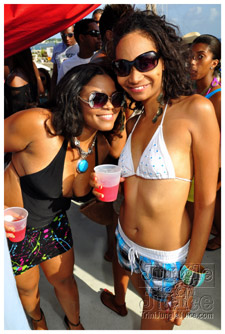 Crop Over Friday in Barbados, you just got to the island but you want to start having a great time right NOW... right this afternoon? Get your shades, shower yourself in sun protection and head to the boardwalk in Bridgetown to meet the Jolly Roger and get the party started with ROAST CRUISE! For the 3rd year in a row this cruise is definitely THE event to join if you are looking for some action.

Cheese n Bread (literally) along with Banks beer were the pre-boarding snacks everyone checked in, singed the Jolly Roger waiver and prepared themselves for a fun-filled cruise.

Shortly after leaving the marina... Jonathan, Jeremy and Renako a.k.a. the ROAST CREW combed through the thick party crowd on the top deck with bottles of Jaegermeister (it’s herbal so it’s good for you right?!?) ... the open bar kept drinks coming and the bartenders seemed to have a time as well.

Even though it seemed like a dancehall vibe in the beginning, with Vybz and Movado tunes blasting... DJ’s Scott Le Roc, Mali Fresh, Salt and the Monstapiece Federation managed without a doubt to keep the crowd happy and moving, and ultimately give them what they craved for: JONES & WUK UP!!!

Who wasn’t wining by that time and needed another "liquid push" ... no reason to worry! The Roast crew came to the rescue with huge containers filled with the legendary Roast Rum Punch ... all we remember it was green and delicious! I think around that time I had lost my sun glasses and tried to climb the rope ladder leading up to the sail ... lol. 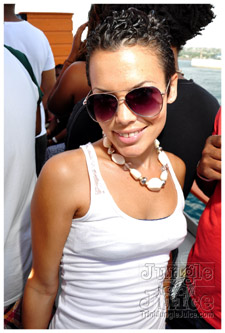 Special shout outs to Khalil from Mount Gay distillers and Lian from Banks Brewery who played a big part in making this event so successful ... no liquor shortage on this boat, we LIKE IT!

When the cruise management announced "Food is ready downstairs!" a good amount of cruisers stayed on the upper deck to keep doing what they did best that day: having a blast! Filling the tummy wasn't on the agenda at that point. When the sun went down there was still BBQ available and let me say it was one of the biggest servings I have ever had on an all-inclusive cruise .. and one of the tastiest! One thing you can't say about Jolly Roger/Black Pearl Cruises: they ain't greedy! .... lol

So to sum it up: great vibe, great crowd, best music, plenty shots and yummy food! What else do you need for a Friday daytime lime during Crop Over??? See you next year Roast Cruisers!!