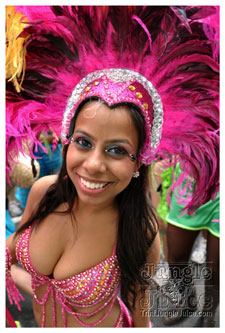 Notting Hill Carnival is London's most vibrant celebration of diversity, colour and sound.

Originally started as an offshoot of the Trinidad Carnival in 1964, the Notting Hill Carnival has become an internationally acclaimed event which remains true to its Caribbean roots. Over the last four decades, it's matured into a melting pot of diverse cultural and musical genres that come together in modern West London streets.

Today it's Europe's largest street festival with hundreds of thousands of regular visitors enjoying live Masquerade bands, Soundsystems, street food, dancing and much more. And London's 2011 is going to be bigger and better than ever.

With all our photographers on the road today we gladly present to you again .... Vantage Point - Day 2

Carnival Monday and it’s a lil’ nippy, but heh… at least it’s not cold and raining. I truly believe that God is a Trini or simply loves Carnival. All the bands done load up already, and although we don’t believe any left on the planned early departure schedule (since things were going to end early), everyone did eventually get on the road to commence the 2011 NHC jamishness!

And this year was a TJJ carnival miracle! All of our favourite NHC mas bands were on the road back to back … Lagniappe, TriniPosseUK (with perhaps the best sounding music truck hands down), Cocoyea, and PoisonUK. So it was not only easy to capture all the great memories on camera without chasing the different bands, but we were also able to better service all bumpers on the road. Stabby D’ Guard would have been most proud -- “All bumpers secured! Salute … Fall out!!”

Some of this year’s highlights on the road were watching Vincy’s Skinny Fabulous charge up PosionUK’s masqueraders from every music truck he could climb up on; Bussing out the “Funky Chicken” dance with our with our good friends in Shipwrecked (Lagniappe); Jones-ing and Wuking-up with the sexy TriniPosseUK revelers and teefing a lil’ wine from friends in Cocoyea and other stay masqueraders while in search for the nearest drinks truck to refill my pink cup with white polka dots with my best friend for the day – RUM PUNCH!

With mas ending immediately following the main judging point was a serious kill joy, but with all of our friends going home with only minor carnival injuries (sprain ankle, bruise back, swollen knees etc.) this year (yup, no ambulances), we went home in the A.O.A with our waistlines still rolling.

My Carnival Love needs No Devotion,

Dre aka The Carnival Ref 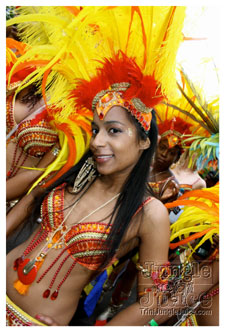 A loud noise from outside woke me up early early monday morning, a car alarm went of and a baby crying from upstairs. I looked at the clock, it was 6:30…. I smiled to myself as I imagined how we all will be doing the 6:30 dance on the road in a few hours. I decided to snooze for a while but couldn’t shake it off, I just wanted to be out there, where it all happens today in London – Notting Hill carnival. I jumped in the shower, got dressed and soon I was on my way, excited. Just for the record, this was my 2nd Notting Hill carnival and expectations were high because last year I had the bess time. I just had a feeling that this year would be just as good – if not better. When I got of the train I could hear the pumping music and the streets were packed with smiling people eating jerk chicken, grilled corn, drinking beers and enjoying the good vibes and tunes in the hot sun. There is a reason why this is the biggest European carnival. People come from all over the world to experience this event where you can see a beautiful parade, listen to music from different cultures and have a taste of something devine such as our carnival (no, I’m not exaggerating. Carnival is divine and I feel sorry for those souls who haven’t played mass yet….). The most amazing part is that carnival brings us all together. I did not see any riots or any trouble makers, big up to all the police and security that kept an eye on us and protected us the whole way.

Ok, lets get to it. I was on my own the most of the time, band hopping to get it all and because of my Stamina (explains my TJJ name) it’s hard for me to stay at one spot as I want ALL. I sensed the vibes in Trini Posse, Lagniappe, Poison and bands I don’t even know what was called – but hey, they had plenty good drinks!

Masqueraders: Had on pretty costumes and were waving their rags. These people had roots from all over the Caribbean, I actually think I saw british people too who were playing mas, wining like they were born to do it. The non masqueraders came with children and their old folks and made an event out of these festivities, they also had a taste of the Caribbean.

Music: We had the privilege to enjoy sweet tunes from Private Ryan and other great  DJs all day on the road. They really captured the essence and played music from this years music and mixed it with old classics.

Wine/Wukups: My specialty!! So this year we had to bend ova and doh look back even though that was kinda hard when it’s not all men I wanna share my “asset” with.  Which leads me to eye candy on the road. The different kinda wine attracts different kinda men…and women. In general, nice mix of people who had a carnival jumbie inside of them and gave out freely juks and wines, pelting waist and enjoying themselves. No matter what band I came into people had their own party so overall impression was that everybody who was in a band had a blast and from what I could see all they needed was 3 things: Good music, drinks and your own little posse (if you don’t have one, make join a posse, trinis are real nice).

7pm the music stopped…hmm, the dj’s started to sing and encouraging us to sing along to wotless and jones and wuk, we were not ready to go home just yet - this ting cyah be over!! But it was, carnival was great. Again I felt refilled in my little carnival heart, Notting Hill, 2012 you will find us in the crowd for sure. 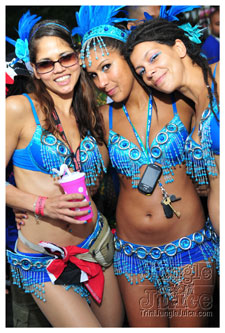 This year Notting Hill felt small... but yet there didn't seem to be any post riot nerves amongst the masqueraders!!! Most people were pleased to see a whole selection of costumes...and this definitely felt more like a traditional mas with full individual costumes, front line, pretty mas and fun mas..and even last minute T shirts!! Carnival was looking good from a male point of view but seriously lacking on hot males for the girls... not sure where they all were?  Drinks were flowing, food was flowing... from a slightly hazy alcoholic infused memory the quality of food and drink provided may not have been the best but nothing ran out and drinks were still flowing all the way to the end. The size of the carnival this year created a nice intimate vibe and by the end of the day everyone knew everyone !!! We had no time to study who the DJs were or even the time throughout the day which is definitely a sign of a good time!!! We loved all the costumes this year, everyone was catered for... only one serious complaint...why did we leave so late ??? We knew carnival was going to finish early and with the police shutting down the music and sending us on a long trek back to the start, we felt slightly cheated!! There were some sour faces when the music truck shut down !!! No riots in 2012 please:) We could have done it all again the day after!!! 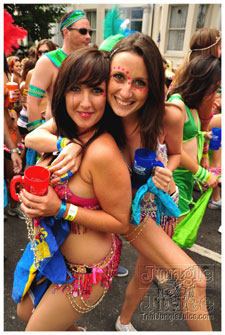 Pretty mas, here we go.. Up in the ‘Enchanted Rainforest’ with TriniPosse UK for the day.. Masqueraders definitely looked like they had a good time. They get on wotless, they get advantageous, ladies whine to the side, fellas take a whine on allllll dem town tings; ahhh, niceness!!

A reduction in numbers this year as TriniPosse UK decided to break from Lagniappe and Shipwrecked, but these people certainly made it known that the size of the band does not determine the amount of action and scandalous behavior that can be made!!

Music got cut off early this year, but TPUK was fortunate to have at least crossed the judging point with the last track for the day. Best of luck to this band.  Hope to see you guys next year in greater numbers, greater colours and same great vibe. One Love 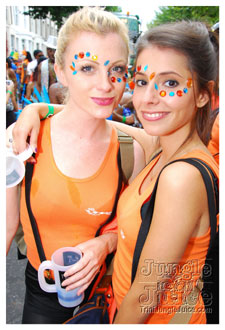 Wow. Notting Hill Carnival 2011 was a blast. Overall, it's one of the best year for Europe's largest street festival. I had such a good time with PoisonUK that I can't remember exactly what happened, apart from the ladies granted the fellas access to take advantage, unforgettable!!! Those who weren't part of the band was wining to the side from the crazy!!! crazy vibes!!! created by DJ Markee (Studio Guyz Movement), Private Ryan (T&T) and many more.

The crowd was charged up to the max. Anything above that and Notting Hill would of exploded. Security was real tight though. Those who weren't part of the band could not get a little wine pon di sexy ladies them, felt sorry for them fellas deh, but oh well next time make sure you're part of the band. I felt even more sorry for them when Skinny Fabulous and Private Ryan having the ladies doing the 6:30, maddd!!!

Huge shout outs to the PoisonUK team, they've always treated JungleJuice like family - drink cup and food always provided.
A huge shout out to all the people who attended the festival, the organisers, the ravers, the police, and everyone who came out or stayed home to make this years Notting Hill Carnival a peaceful and enjoyable experience. Peace and Love, and we see you next year.