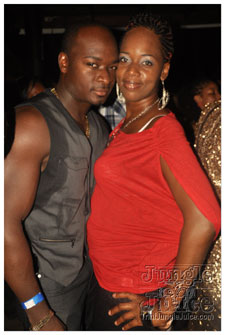 The Permit Fete has always been one of the most talked about fetes during Carnival weekend, especially amongst the who's who on the Spice Island! We rushed out of Soca Monarch early to head to the other side of town for a can't miss event. A swanky fete with most of the sexy, most fashionable cool kids in town. They come together for a mixture of socializing and a tad bit of sweaty bad behavior.

The Aquarium is the perfect location for any fete! Ever since I was old enough to fete I've been coming to Aquarium for a bunch of the best can't miss events. I've always been in love with the scenic atmosphere whether dining in the day, or feteing at night. Its not a real Aquarium, but it does indeed hold the aura of one. With decor emulating an underwater wonderland with mermaids and exotic sea creatures. No better place to have such a venue, then right on the beach! Fresh island sea breeze captured the venue, and patrons had the option to chill outside either on the deck or on the sand, or stay indoors.

There were a number of locations throughout the venue for drinks! A bar housing top shelf liquors welcomed you at the door with warm smiles, another on the deck, and a drink tent setup in the lower outdoors. Everywhere you turned, drinks flowed! Our bellies began to grumble as our noses picked up the scent of some savory bbq being grilled outdoors by Aquarium's chef. He smiled with so much charm as he served up some ginormous pieces of bbq. Yum!

Music stayed on point throughout the night thanks to D'Bandit from Toronto and Black Storm. The night rocked out till about 5am. Patrons began to scatter, some too intoxicated to climb the steep hill out to the main road. Some tumbled and some ended up sprawled out with legs over head, but its all ended with laughs and excitement for the lime next morning onboard the Bikini Cruise.