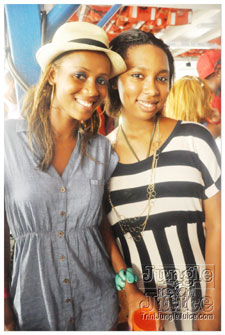 The TJJ crew arrived at the heart of St. George’s, where Rhum Runner’s 1 and 2 party boats were docked and immediately noticed that we were a part of one of the sexiest crowds we’ve been in with the entire season. All there for the highly anticipated Summercrew Bikini Cruise. Long story put short. Designer sunglasses, sunscreen and Bikinis EVERYwhere! What a way to kick off a Saturday morning.

It was almost impossible not to get amped approaching the boats as the rhythms of the ‘Flavour De Mas’ percussion band could be heard ringing across the Carenage. We met two absolutely SOLD OUT ships where patrons without tickets were willing to pay top dollar to get on but, thanks to Bobby, the entire team were able to board. His exact words were “ya’ll are priority” and we were treated like just that by the Summercrew family once on board

Even though a slight delay was announced the patrons seemed to not care especially when they were assured an additional hour at sea. That being said, everyone continued to mingle and toss back a few cold ones. Not long after, Cocoa Juice and I met up with Daddy Juice and Frenchie and the TJJ team was ready like Freddy. 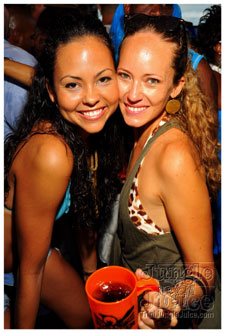 The scene on the ‘party boat’ was a mix of cool-kids, mature but fun-loving adults and all out gettonaz, the likes of which melded seamlessly. Before long we set off and some of our hottest local DJ’s dropped the biggest and latest soca. They had the middle of the vessel looking more like a club. From where we sat, the VIP boat didn’t seem to be short on a good time either but the vibe was too sweet and the energy to rich to think about anyone else’s good time. When Titan VCD got on the wheels of steel he brought a nice blend of international music that was received by some well-oiled waist-lines.

Before long it was time to eat and in my opinion, that was the most organized party-boat crowd I’ve seen in a while, orderly lines FTW! After the brief pause to eat, Iwer ‘D Boss’ boarded our boat and tore it to shreds, commanding everyone to “come to me” If that wasn’t enough Mr Whine to the side, Benjai mash-up what Iwer didn’t and by the time we docked the survivors clearly needed naps, always a sign of a great time. Another mad cruise by Bobby, the Summercrew team and VCD.