Marionettes gear up for Steelpan Jazz and Holiday Moods 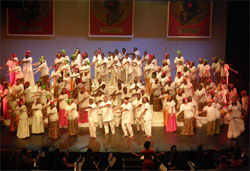 OCTOBER 24, 2008 (PORT OF SPAIN, TRINIDAD & TOBAGO): -- As they look forward to celebrating their 45th anniversary next year, the Marionettes senior and junior choirs are working hard on two must-see upcoming performances. The choirs will be performing in "Voices & Steel" as part of the Steelpan Jazz Festival this Sunday 25 October, then enter the home stretch for their anticipated December concert, "Holiday Moods".

At "Voices & Steel", the Chorale will once again team up with the Noble Douglas Dance Company, the Police Band, a vibrant team of percussionists, Celia Wells for lights, and Randy Halfhide for sets to re-mount the highly successful tribute to local composers from their July concert.

"Holiday Moods" opens on December 4 with a fundraising gala benefiting the Cancer Society of Trinidad & Tobago. In collaboration with sponsors bpTT, the group will also present a special matinee on December 6 for senior citizens and children from various institutions across the island, for whom bpTT also will provide transportation and holiday gift bags. These performances are the ones to which the Marionettes most look forward, and have always received enthusiastic and steadfast support from bpTT who have sponsored the Marionettes since 1972.
Tickets for "Voices & Steel" are $150, available at the Queen's Hall and online. Tickets for "Holiday Moods" go on sale from November 10. For more, visit the Marionettes' Page on Facebook; the group's MySpace page (www.myspace.com/themarionetteschorale); and the official website at www.marionetteschorale.com.
ABOUT THE MARIONETTES:
Founded in 1964 and incorporated as a nonprofit in 2006, the Marionettes Chorale is one of the Caribbean’s most celebrated choirs, both at home and abroad.  In 1995, the Youth Chorale was formed, comprised of boys and girls from over 30 schools throughout Trinidad & Tobago who regularly share the stage with their senior counterparts. Led since 1974 by conductor Gretta Taylor, assistant musical director Susan Dore and secretary and founder member Joanne Mendes, the choirs mount at least two major productions a year, showcasing a repertoire ranging from European Renaissance to Caribbean Folk and Calypso.
INQUIRIES:
Contact: Caroline Neisha Taylor
E: email@marionetteschorale.com
W: www.marionetteschorale.com, www.facebook.com/pages/The-Marionettes-Chorale/9237400923, and www.myspace.com/themarionetteschorale
T: (868) 461-0268
PHOTO ATTACHED:
The Marionettes pay tribute to local composers at their July concert at Queen's Hall. Photo by Celia Wells