By Jeni I.
Published on 30-Jul-11
Island Fusion - Safari Edition were possibly the largest Foreday Morning band on the road this year in Bim, with over 900 signing up to take part in one of the newest and most ...
>> View Foreday Morning 2011 Gallery
>> View Barbados Crop Over 2011 Coverage 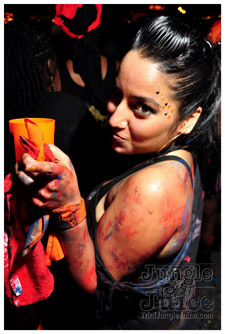 Island Fusion - Safari Edition were possibly the largest Foreday Morning band on the road this year in Bim, with over 900 signing up to take part in one of the newest and most talked about bands, TJJ Fam included!
CROWD:
The crowd was hype, with people talkin bout who was and was not with the band, women gossiping about which section they had managed to swindle their way into and men excited to see which paint covered hottie they'd be able to wukkup on.

Island Fusion were one of the few bands this year (their 2nd year on the road) who introduced a full Foreday Morning costume for the women based on a Safari theme with six sections, consisting of; a pair of pompom shorts, t-shirt and accessory.  They also had a frontline section which consisted of a swim suit.

VENUE/ACCESSIBILITY:
Town is town, if you couldn't find yourself there then you in trouble!  The band did however leave spot on time, which for those with no time management, my crew included it did make it a little harder finding the band at first.  It wasn't long though before we had managed to literally chase it down a few hundred metres down the road looking worryingly clean.

VIBE:
At first we definitely thought we had joined the 'bougie band' with few people wanting to get messy, but that soon changed as cups emptied and refilled.

The truck pumped out great music throughout the early hours of the morning as we chipped down the road.  Sadly although I don't think to any fault of the Island Fusion people we were made to chip almost the entire way through, which after a while became a little annoying for the hard core reveler! 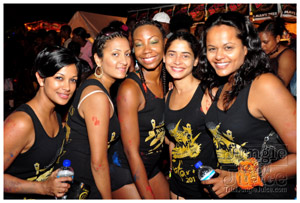 Island Fusion also promised mud and paint, which they delivered although whether intentional or not, by the time us eagerly awaiting troublesome people got our hands on any it more resembled dirty water, definately not paint or mud. :-( I can't lie I was disapointed.  We did still get on bad!


FOOD & DRINKS:
The food at the end of the route at Wisers was great and they provided for everyone.

Now unless I am mistaken there was only one drink truck, and I don't know about anyone else, but gettin a drink was stressful business!  Perhaps with that many people next year two years could ease the load.

SERVICE:
Service was variable, with a mixed bag of pro's and cons.  Parking was provided outside Weisers with a free shuttle to the start point for those who arrived on time, which was sweet and the food was delicious.  Sadly the drinks took their time off the truck even though the poor guys were working their butts off.

Another downfall I hate to say was the organisation, having not made the cut off date last year I was eager to sign up my possee this year and there were 30 of us!  Granted there were a few slip ups on our side, but there were a good few on the Island Fusion side too which made the whole paying and collecting process very stressful!!!  Despite the hardworking team I did want to pull my hair out a good few times when things went t**s up, but we were able to sort all the costumes, even if it was very last minute. 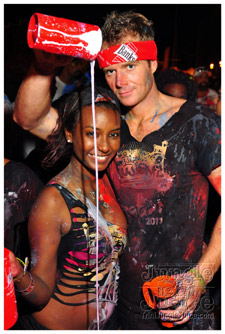 COST/VALUE:
At $125 it was great value for money for what they offered and we did feel we got our money's worth, so all in all it was definately worth while and I know for sure they will be sold out again next year way inadvance!

Package included:• The Costume i.e. T-Shirt and Shorts (Female) – T-Shirt (Male)• Security for a safe and secure jump for the road• A fully equipped music truck serviced by some of Barbados' best DJs • Free drinks on the road• Goodie Bag• Mud, paint and water on the road• Parking for patrons during the foreday morning jump• Breakfast after the jump at Weisers on the Bay"

To sum up, the costume was cute, the music was tight, people had a ball and Island Fusion provided a great Foreday Morning experience!

Thanks for your patience Sade and Big thanks to Toni Thorn for all her help! xx