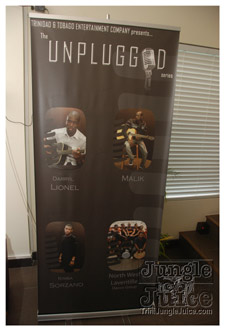 We Trinis are a creative people.  We are constantly producing ambassadors of entertainment.  We have a long history of being the creators of Limbo, Steelband and Calypso.  And our indigenous Carnival has successfully been used as a platform to showcase our talents in all forms of entertainment.  The Trinidad & Tobago Entertainment Company, TT Ent, is also one of those platforms.  This state company has the vision of developing the entertainment industry in Trinidad & Tobago with a particular focus of showcasing emerging talent.  From this vision The Unplugged Series was born!  And in spite of the present State of Emergency and associative 9pm to 5am curfew the second edition of The Unplugged Series must go on!!!

The second edition of The Unplugged Series was held at the TT Ent offices to a specially invited crowd on the fourth day of the State of Emergency starting at the earlier rescheduled 4pm hour.  And this VIP invitation list would not be complete without TJJ being on it!  So the TJJ family hurriedly made our way to Long Circular Road, Port of Spain to The Unplugged Series.

The Unplugged Series, hosted by the TT Ent’s CEO Dionne Mc Nicol-Stephenson, opened in the most appropriate way with an R & B rendition on the National anthem by all female A Cappella group Belle Republic.  These girls smartly dressed in matching outfits set the tone for the night and made it clear that the TT Ent’s Unplugged Series was indicative of the widely popular MTV Unplugged Series which showcases acoustics sets from today’s top artists and also introduces the stars of tomorrow.

Our host then warmly welcomed the audience and gave a quick synopsis of TT Ent.  She emphasised that TT Ent has as one of its objectives to develop new local talent by pairing them with established acts in a mentor relationship.  Speaking of established acts there were notable presence of prolific song writer and now lead vocalist of a new all girl soca band Nadia Batson.  And who could miss the red dread Nigel Rojas of the Caribbean Rock band Orange Sky.  Now with all formalities out of the way it was on with the show.

The first performance was a clear diversion from the expected acoustic set with limbo dance routine from the North West Laventille Cultural Movement.  Even though these dancers performed a solid limbo dance routine accompanied with live African drumming, putting them on the line up seemed odd in light of the theme of Unplugged.  My only advice to this talented group is to shorten their stage name.  Dance Cultural Movement or just Cultural Movement seems more current especially if they are going to be showcased as cultural ambassadors for all of Trinidad & Tobago.

Next on stage was self described Urban Alternative singer and guitarist Darryl Lionel.  He successfully completed three songs, while being accompanied by another guitarist, singing in a thick North American accent even though he had only lived in Canada for less than six years.  His lyrics were forgettable while his melodies appeared dated and reminiscent to the Seatle Grunge Musical Movement of the mid 1990s.  I believe that if Darryl wants to become an Alternative singer then he should go back to the drawing board and lose his accent, find his voice in a place between modern Alternative Rock and Caribbean Pop, and restyle his appearance to an edgier look.  Only then would the young and fickle music buyers accept him as that type of performer, otherwise I believe that he should return to his where he naturally resonates in Gospel music.
Rapso artist Malik Innis, accompanied by a fellow guitarist and two back up vocalists, was next.  His musical renditions came across quite raw and unpolished but were still authentic as he sang about life in his world as he sees it.  Again there were styling issues with this group of performers as there was no common thread among them.

The last upcoming star to perform was a performer that I have seen before during TJJ coverage of 2006 Synergy Soca Star in which he placed second, he’s someone who can be currently be seen in his “Maria” video posted TTJ’s 2010 Soca Music page, he is Kimba Sorzano!  This 27 year old experienced performer clearly demonstrated his voice control, vocal range and general likeability with his performances of “Over You,” “Get On It” and everyone’s favourite “Maria.” This complete performer is the type of talent that TT Ent should invest its musical dollars into.  I just wished that he was under management similar to the likes of door opener Simon Baptise manager of Kes The Band, and that he was at least nine years younger so that he could now have the time to get as much experience and exposure as possible.

Closing the evening’s proceedings was Nadia Batson, accompanied by one of her fellow female band members playing an acoustic guitar, singing her 2007 ladies’  anthem “Caribbean Girl.”  In the end The Unplugged Series concept was not a new one but it did fulfil its objective of promoting embryonic local talent.