By Cyron Fraser aka TallGlassAhJuice
Published on 06-Aug-11
Finally it was time for the TJJ-Grenada crew; Cocoa Juice and I, TallGlassAhJuice, to head out of the capital city, St. George to cover one of the season’s staple concerts, White in The Moonlight, held at the island-famous Moonlight City in St. Andrews.
>> View White In The Moonlight 2011 Gallery
>> View Grenada Spice Mas 2011 Coverage 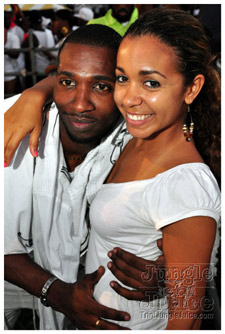 Finally it was time for the TJJ-Grenada crew; Cocoa Juice and I, TallGlassAhJuice, to head out of the capital city, St. George to cover one of the season’s staple concerts, White in The Moonlight, held at the island-famous Moonlight City in St. Andrews.

After a 20 minute drive we arrived, parked and walked for another 15 minutes! (we were told it was the smartest way to dodge the traffic situation afterwards. We then found the press/VIP entrance flashed our badges and walked in to what felt like a sea of white, the size of the crowd outside would have one thinking the venue was empty but, that wasn’t the case. Clearly, getting here early was a good idea.

The venue in itself serves well for events like this with ample seating, coliseum style and ground room  Not to mention there were more than enough Food stalls and what seemed like bottomless bars (If yuh see drinks). The only issue we had was how hard it was at times to go up and down the stairs because of the crowdedness. 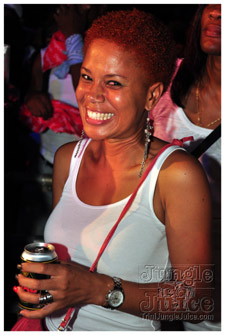 TJJ hit the crowd without hesitation and we began capturing the scene. The show kicked off with a couple local cover bands who had the already ‘DJ hyped’ crowd swinging, followed by a few local heavy hitters who really did their thing and the session was nice but the entire arena’s energy shot through the ceiling once Kes hit the stage. When the ladies heard the synthesized intro for “Come Gyal” I thought the fence wouldn’t be enough to keep them off of him.

When Kes the band was spent more talent, both local and our neighbours Trinidad and St. Vincent graced the stage. Special mention has to be made of Tallpree and Iwer who kept the party going into the wee hours of the morning and Benjai who made the arena go nuts all while wearing flip flops!

One tip though, leave before the crowd does or suffer the 45 minute wait in traffic.  This is DEFINITELY one of the sessions we’ll be looking out for next year, incident free and well worth the drive.