International Socafest is back in Miami for Carnival 2k11! 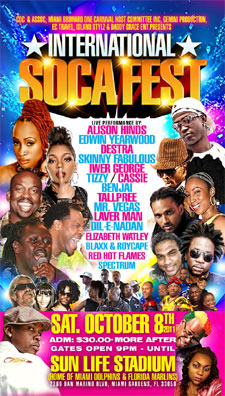 We’ve waited a long time but the INTERNATIONAL SOCAFEST is back in Miami for Carnival 2k11! This magnanimous fete promises to be the most inclusive party over the Miami Broward One Carnival weekend.

At 9:00pm on Saturday October 8th, 2011 the gates of SUNLIFE STADIUM will open to showcase a spectacular line up of Caribbean entertainers that boasts some of the best soca in the world. Artists hailing from all over the Caribbean, making each and every patron feel like they are home away from home.

The line up of performers is as follows: ALLISON HINDS & the Alison Hinds Show, representing Barbados together with EDWIN YEARWOOD, lead singer from the band KROSFYAH and the current Road March winner for Crop Over 2011.

RED HOT FLAMES, lead by Sir Clarence “ONGU” Edwards, and the sensational TIZZY, hail from the island of Antigua. Their performances have captivated audiences throughout the Caribbean.

SKINNY FABULOUS from St. Vincent & the Grenadines is a rising star that continues to energize his audience with his electrifying performances.

TALLPREE, Mr. Jab-Jab, from the island of Grenada, this artist has created and maintained his own genre of music and followers ever since his mega hit ‘Old Woman Ah Taking Home’ and has continued to mesmerize patrons at every occasion. Joining him is his fellow countryman LAVA MAN.

DIL-E-NADAN band, lead by the heartthrob Raymond Ramnarine a.k.a DA SHOW STOPPA, is one of the most dynamic Chutney music bands from TnT. Their addition of top vocalist Derrick Seales has made them even more versatile in their repertoire.

NEIL'IWER' GEORGE known to many as ‘D BOSS’ or the Big Man In The Business, burst unto to Soca scene in 1987 and never looked back. This year, his mega hit ‘COME TO MEH’ steals the show wherever he performs and in true IWER fashion, he is coming to take over the stage at SOCAFEST.

BENJAI, dubbed as one of the most lyrically savvy artist from Trinidad & Tobago continues each year to showcase his talent both as a Ragga, Groovy and Traditional Soca Superstar. Evidence of such can be heard in every Soca Fete/Party this year with his two mega songs, ‘AM AH TRINI’ and ‘WINE TO DE SIDE’.

DESTRA GARCIA the Supreme Soca Diva, taught us how to ‘TREMBLE IT’. She continued her reign on the soca scene releasing her first album, RED, WHITE & BLACK in 2002 and continuing to ‘MAX IT UP!’ (her catch phrase). With unforgettable songs like Bonnie and Clyde, Whe Yuh Want, Come Beta and It’s Carnival, Destra’s Diva status is well deserved.

Rounding out the tremendous cast is CASSI. He emerged onto the spotlight this year with his hit ‘TOWN TING’. Riding the waves throughout North America this mega hit is enjoyed by DJ’s and patrons alike.

HOW DO YOU GET TO THIS STAR STUDDED EVENT?... SUN LIFE STADIUM is located at 2269 Dan Marino Blvd., Miami Gardens, Fl., 33056. (corner of NW 199th St & NW 27th Ave) This venue is home of the Miami Dolphins Football Team, Florida Marlins Baseball Team, University of Miami Football and JAZZ in the GARDENS.