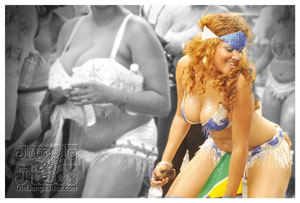 This West Indian Day Parade on Eastern Parkway in Brooklyn, just was not the same this year. It seemed to be one of those years...it didn't start too well, nor did it end too well. But people still seemed to have a bit of fun for the time, especially those boys in blue. Masqueraders done spent their money on a costume, and it was the wrap up of a long weekend.

This year we got to party on the parkway a bit late! The parade went until 6pm! Years of good behavior must have paid off!...but people bound to ruin it before it even began. Police patrolled like hawks and wolves, especially due to the violence on the earlier the morning during jouvert. The violence continued throughout the duration of the parade, a few injured due to shootings that occurred during different points of the day.

They cut off the Haitian and Jamaican trucks from going on the parkway this year. Eliminating more than half of the parkway population. Ramajay and Sesame Flyers were the biggest and lives bands on the road, as every year, and the Greenz posse seemed to have come larger this year too in a piece of shorts and flags. But the entire parkway just seemed so disorderly and scattered. It got off to a late start. Bands weren't ready and had big gaps between each other. Some bands only had a sum of 20 people! 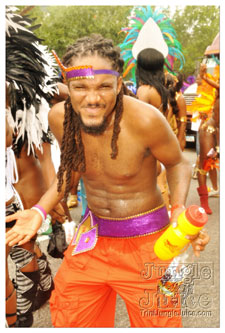 The weather held up for the day, we expected heavy rains, but it drizzled a tiny bit, n we were able to make it home.

Some of the costumes were really nice this year, but too bad the jump up this year didn't seem too hot. But the NYPD sure did enjoy it! Daggerin' police were on the scene and inspectin bumpas straight through!

Parkway got a bit scant and washed out bout 2o'clock and we felt the need to walk back. Especially with all of the commotion going on all over the place.

Don't leave home without your bulletproof vest. You never know what kinda year its gonna be for Labor Day in these Brooklyn Streets.

Do! Come early, especially if you paid good money for your costume. Never know if the parade will shut down early!

Do! Come with a group of friends! Only creeps come on the parkway by their lonesome.