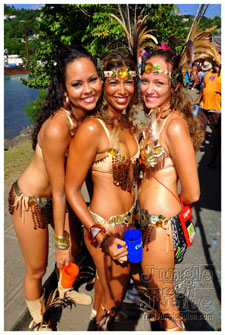 After missing pretty mas on Monday, we made sure we arrived bright and early for Tuesday’s Spicemas Parade. And like 2010, SummerCrew was our mas band of choice to jump with. This year’s SummerCrew presentation was "Rise" and the band consisted of five (5) sections; acessoRISE, solaRISE moonRISE, sunRISE and surprise.

CROWD:
If comparing to Trinidad & Tobago, SummerCrew is the TRIBE (mixed with some ISLANDpeople Mas and Harts) of Grenada Spicemas in terms of its masqueraders, with loads of eye candy ... well we can most certainly vouch for the sexy women. On the other hand, the number and size of the mas bands are nowhere in the same ball park. Spicemas only have a hand full of fancy mas bands, and SummerCrew consists of a few hundred masqueraders.

VENUE/ACCESSIBILITY:
Masqueraders meet at Lazy Lagoon before hitting Lagoon Road unto Port Highway and Carenage. Grenada’s carnival route is most certainly an enjoyable one as bands parade along the beautiful Carenage waterfront and the scenic St. George’s harbor as the sun sets. The streets are wide enough to accommodate the number of masqueraders, allowing enough room to jump, wave, wine, wukup and palance in any form or fashion.

If you’re able to grab a water taxi at end of route to get back to start, definitely do so. 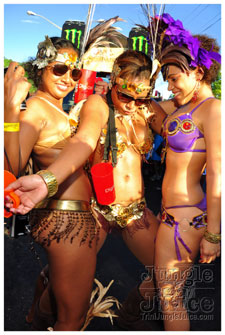 VIBES:
On the road for 2011 with SummerCrew was a host of foreign DJs which included Titan VCD direct from Trinidad alongside all of their local Bananas DJs ... and not forgetting the big Carib trailer. And you can always count on some surprise performances by guest acts with the likes of Tallpree and Baby Killa passing thru to energize the revelers. The DJs definitely did a good job in mixing up the music beyond just local 2011 Grenada Soca – we even got some Machel, Kes and a half of Lil Rick’s “Jones and Wukup” – but after all it is Spicemas! So when in Rome.... “So We Dey” for the hundred time!!

Btw, the introduction of the Rhythm Section truck was a nice touch guys.

FOOD/DRINK:
SummerCrew is a is a Premium Drinks inclusive band. Their masqueraders each received a “Drinks card” entitling them to a set quota of beverages (I think its 10 drinks for both Monday and Tuesday). Every visit to the drinks truck would equal a hole punch by bartender, which was working efficiently up to the point when masqueraders did in fact bombard the drinks truck and bartenders were more focused on mixing drinks than punching holes.

I honestly cannot recall if food/lunch was served, but I do recall the same mini Patty Shack van, that we hitched a ride in for Monday Night Mas, trailing the band selling Jamaican patties at $5EC/ea. The chicken patty was surprising really good. 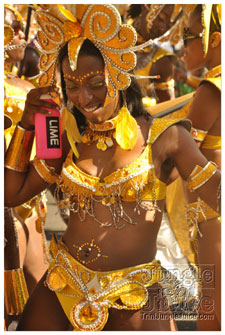 SERVICE:
This is where it all fell apart ... and I don’t really drink!! But the real drinkers all agreed that this year's bar situation was terrible with extremely slow service and a narrow selection of chasers. It felt like it was always two bartenders working at any given time, and there was no system in place. Furthermore, the drinks truck actually closed down for 10 minutes, not once, but twice!

We recommend putting two drinks trucks on the road next year ... one for water, beer and soft drinks and the other for mix drinks. And the mix drinks truck should have pre-poured liquor in cups (at least for the commonly ordered drinks) ready to grab and mix with reveler’s chaser of choice.

Although we didn’t spot Santa Claus playing mas this year, we did manage to thoroughly enjoy the road on Tuesday thanks to SummerCrew and won’t hesitate to play mas with them next year. Their Bikini Cruise and Mas experience definitely make our top Spicemas highlights very year.

So We Dey,
Daddy Juice aka The Carnival Ref

Fancy Mas Band of the Year
1. Commancheros and Assoc: Lost Treasures beneath the Caribbean Sea
2. Andre Garvey & Assoc: Lead us into temptation
3. RKD & Assoc: A taste of India