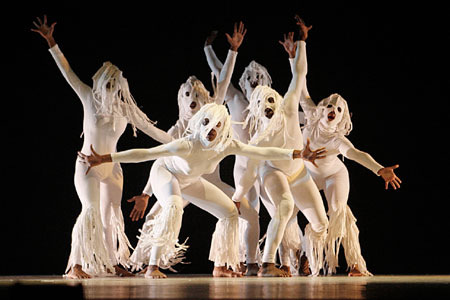 Photo: Noble Douglas brings a sense of hysteria to the stage in one of the company’s earliest works, Hysterics.

October 4, 2011 – Port of Spain, Trinidad and Tobago ... In the peak of Trinidad and Tobago’s dance season, the premier contemporary modern dance company, the Noble Douglas Dance Company Inc. (NDDCI), will launch its 2011 dance season, SIGHTS and SOUNDS. The intermission-free production, which runs for just over an hour will open on Friday October 14, 2011 at 8:00 p.m. at the Little Carib Theatre. Performances will continue nightly until Sunday October 16, 2011.

NDDCI’s latest presentation, will feature major new works created specially for this season. The company’s founder and artistic director, Noble Douglas, has forged a tradition of nurturing young choreographers by challenging her dancers to create. In this vein, Malvani Seelal Alexander and Arlene Frank joined forces to create an Indo modern fusion piece entitled, Mhurtani; Kevin Jack entered NDDCI’s choreographic circle with his premier work, 3 Women; Charlene Harris offered her piece, Intent, which was originally created for Lilliput Theatre’s 2011 production, The Changing Of The Guard; while Sherid Mason and Kwasi Romero have each risen to the occasion with new works.

As the company enters a new stage of its development, it has welcomed young dancers recruited from Lilliput Theatre with a vision to ensure that Douglas’s dance legacy lives on. The veterans led by Harris, Charlene Rollock, Louanna Martin, Frank, Denise Dickson-Cunningham and Allan Balfour are ever present imparting their knowledge and inspiring these new professionals to their best.