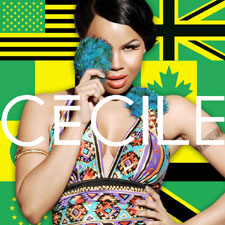 Ce’Cile has had a constant presence in Europe and the Caribbean throughout her career...

Kingston Jamaica, October 11, 2011:- Few Jamaican artistes have been able to consistently churn out relevant material locally, maintaining a large and loyal fan base while at the same time having an international appeal, Ce’Cile is one. Known as the Bad Gyal of Jamaican music, Ce’Cile is fresh and clean with a new album called Jamaicanization, New Videos and new dancehall tracks which will be essential to any popular DJ’s playlist.

Over the past months the artiste has maintained her presence locally with dancehall tracks such as Woot Woot (Smoking Riddim), Pree Mi (Blaze Fia Riddim) and more recently Tip Me (Green Faces Riddim) While on the reggae side she has released heavy hitters like When you’re Gone (Cardiac Bass Riddim), Rise Up (Message Riddim) and Missing You (Monte Carlo Riddim). These are just some examples of how this musical dynamo straddles both the Reggae and Dancehall genres effortlessly. The artiste has just recently premiered the video for When You're Gone / Missing You.

Not only has Ce’Cile been dominating the local airwaves with some hot tracks but she has also been present on the local stage being a crowd puller at shows such as Reggae Sumfest 2011, LIME Fashion Nite Out, LIME ‘Skool Aid’ and several other locals shows. However, Ce’Cile's presence is always mostly felt on the international stage.

Ce’Cile has had a constant presence in Europe and the Caribbean throughout her career and this year it has been no different. The artiste is a regular on the stage and in the clubs in countries such as Germany, France, Netherlands, Amsterdam, French Guiana, and Africa.

Ce’Cile kicked off the “Jamaicanization European Tour” with performances at a host of festivals including Summer Jam (Koln Germany), Juicy Beats Festival (Dortmund, Germany) Berlin Reggae Fest (YAMM Berlin, Germany) Fest in the Park (Belgium) and Amsterdam Reggae Fest (Amsterdam). CeCile also made stops in French Guiana and Belize and will continue with stops in places such as Guyana and ST Kitts and St Maarten in the coming weeks.

More than any other European country, CeCile is most popular in Germany and has been one of the most dominant Jamaican artiste on the German charts for several years and the only Jamaican female artist on said charts. Ce’Cile is nominated for Africa's Channel O awards in the category of Most Gifted Ragga Dancehall Music Video for her collaboration with Kenyan artist Wyre with the She Say Dat Remix. Ce’Cile shot the video with Wyre while in Kenya in March of this year.

Ce’Cile has released Jamaicaization on iTunes and via mobile APPs. The album which was released August 19th in Germany has been previewed in magazines such as Grazia, and the German Playboy. Ce’Cile is also one of the few Jamaican Dancehall artistes utilizing Album Apps and her full album plus lyrics are available as application download for Android and iPhone users. Jamicaicanization is not yet released in Jamaica contains sixteen tracks of which thirteen are brand new. So far the reviews have been excellent.

Reggaeville.de states: “In fact, Jamaicanization is an album to listen to from beginning to end. It works for Dancehall Fanatics, it words for a(more or less) mainstream audience, it works in a club as well as a background soundtrack while having breakfast doing ironing or whatever”

Unitedreggae.com says: “the album is, arguably, her most high profile release to date and is also going to have a legitimate claim to being her finest piece of work to date. Along with the extensive work of Bazzazian, who helms much of the album, listeners can also look forward to well known pieces such as Woot Woot, Nah Stress Over Man, Step Aside and others which feature backing work from the likes of Tony 'CD' Kelly, Stephen McGregor, Chrome and Ce'Cile, herself”.

Reggae France quips: “there is a practice almost become legion is laying as an album, a compilation of his series of interventions on the riddims. But it will not happen here, the beautiful Jamaican has not paid the head of his public: of 16 titles, 12 are completely new!”

Jamaicanization has also been doing well on the charts. Two of the songs on the album; Step Aside (Beep Beep) and Singing This Song are currently number ten and eleven on the MTV German Black Charts. Ce’Cile is sitting pretty in the middle of the chart and is ahead of artistes such as Lil Wayne, Drake, 50 Cent and Mary J. Blige, Singing This Song peaked at #4 on said charts.

Jamaican fans can go to purchase or listen the album at iTunes US or visit www.jamaicanization.com for more information.