Forward Home to premiere in Suriname 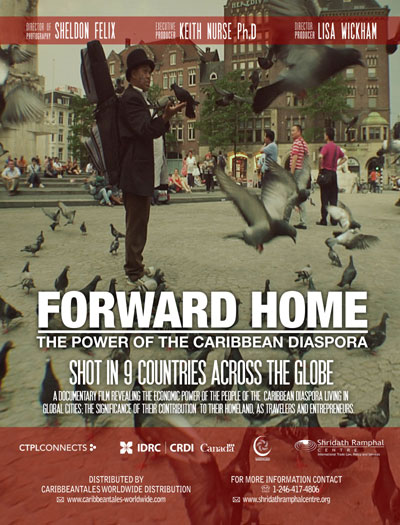 After a successful premiere in Toronto and Barbados, the seminal documentary Forward Home: The Power of the Caribbean Diaspora, will debut in Paramaribo, Suriname on October 17, 2011.

The documentary which was shot in nine (9) countries across the Europe, North America and the Caribbean, is based on two years research by renowned economist and creative industries specialist, Dr. Keith Nurse and his research team at the Shridath Ramphal Centre, UWI, Barbados.

The 50-minute documentary, which is funded by the International Development Research Centre, Ottawa, Canada was filmed by award-winning Trinidad-based Producer-Director Lisa Wickham and Director of Photography, Sheldon Felix.

According to Dr. Keith Nurse, who was also the Executive Producer of the film, "The documentary helps to map the contribution of the Diasporic economy and specifically Diasporic tourism to Caribbean economies. In that regard Suriname is an excellent case study because of the relative size of the Diasporic economy in Suriname. In many respects the key driver of the Surinamese economy is related to Diasporic flows in travel and tourism, remittances, trade and telecommunications."

Filming in Suriname was facilitated by the Suriname Tourism Foundation. The premiere in Suriname will be hosted by IntEnt, Suriname at TBL Cinema and will be followed by a panel discussion.