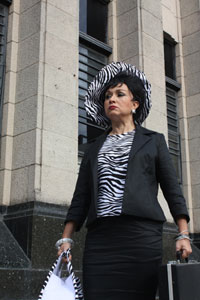 THURSDAY 13TH OCTOBER, 2011 (PORT OF SPAIN, TRINIDAD): Set for an premiere on 20th October at the historic Little Carib Theatre, Tony Hall’s Lordstreet Theatre, in association with Trevor Jadunath, presents one of the most anticipated local plays in recent memory: Miss Miles – the Woman of the World.

Written and directed by veteran actor, playwright and director Tony Hall, the one-woman play Miss Miles – a Woman of the World features the award-winning actress Cecilia Salazar as Trinidadian activist, singer, fashionista and public servant Gene Miles. The play focuses on the clash between Gene Miles’ conscience, religious faith, belief in truth and the rigid pre-set notions of the status quo. The story traces the 42 years of this attractive and intelligent woman's short life – from growing up in pre-independence, colonial, Roman Catholic Trinidad, attending St. Joseph’s Convent (Port of Spain), to the black power days of the early 1970’s, when a struggle to develop a new and just society gave rise to social transformation.

Gene Miles, a Trinidad and Tobago patriot, took on the powerful state administration in an anti-corruption campaign, The Gas Station Racket in the 1960s – and paid the ultimate price. It is perceived widely that she stood up for high standards of morality in the public service. She caused a commission of inquiry to be launched into what became known as the “Gas Station racket”. But along the way “Gas Station Gene”, who was rumoured as having an affair with the People's National Movement minister of government John O'Halloran, lost her job, became a nervous wreck and was often seen wandering the city of Port of Spain, bedraggled and drunk. She died of a heart attack at 42 years old.

Hall has a long career of documenting local lives and culture. He has worked with the Trinidad Theatre Workshop and at the pioneering Banyan Limited. In 1992 he codirected the award-winning documentary, And the Dish Ran Away With the Spoon. His acclaimed play, Jean and Dinah, is being adapted into a feature film. Hall's other plays include the powerful and provocative Twilight Café; and with David Rudder, the ground breaking calypso musical The Brand New Lucky Diamond Horseshoe Club. Hall’s work has been celebrated by local audience, critics and fellow writers as some of “the finest West Indian theatre” (Derek Walcott), a “triumph” (Earl Lovelace), and “lively…touching…powerful” (Judy Raymond).

Cecilia Salazar is one of Trinidad’s most celebrates and well-known actresses. She holds a BA in Theatre from Brock University in Ontario, Canada. She also holds the current record for the most awards for acting given to an individual in Trinidad and Tobago – seven Cacique Awards. Some of her many roles include: Dame Jab in 3canal’s Jab in the Box; Sarah/Woman in Hall’s Twilight Café; Cleotilda in Earl Lovelace’s Dragon Can’t Dance; Lizzie in Richard Ragoobarsingh’s Mary Could Dance; Bolom in Derek Walcott’s Ti-Jean and His Brothers; and Mme de Tourvel in Christopher Hampton’s Les Liasons Dangereuse.

ABOUT LORDSTREET THEATRE COMPANY:
Apart from building plays for street, stage as Lordstreet Theatre Company - LTC and screen as Lordstreet Pictures and the digital arts recording studios of Vengeance Media, Lordstreet also provides media and communications services to organizations on the islands and location, casting and production services for film, video and audio projects in the territories of the southern Caribbean. Vengeance Media, a digital recording arts facility, was started by Mauri “KeKere” Hall as A Tobago Music Project in November 2006. In 2010 he opened a sister Vengeance Media studio in Toronto Ontario and Wolfville, Nova Scotia, Canada. Lordstreet also co-ordinates the activity of the Jouvay Institute and a Playwrights Workshop.

**PHOTO BY RODELL WARNER
Cecilia Salazar, next to the Treasury Building in Port of Spain, portrays the inimitable Gene Miles.